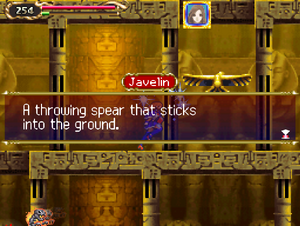 The Javelin is a spear that is thrown in a low arc. They usually cannot go through walls or floors, but have the added ability to inflict continuous damage on the spot they land until they disappear.

Spear Throw is the first soul Soma will obtain in the game. It is granted at the beginning of the game, where a group of Winged Skeletons and Skeleton Knights attack him, Mina and Arikado. In the cutscene, Genya casts Soul Steal and all enemies but one are defeated. Soma is then forced to protect Mina from a Winged Skeleton, unwillingly making him absorb its soul; it is at that precise moment when Genya confirms his suspicions and Soma realizes he is in fact the reincarnation of the Dark Lord.

As the first soul of the game, it has considerable high power and range, piercing through enemies and, once it lands, staying on the ground for 0.5 seconds, dealing continuous damage (up to three can be onscreen at once).

Magic Spear Throw can be obtained by gaining dominance over Slogra's soul once Soma reaches the Mine of Judgment.

In contrast to its Aria of Sorrow counterpart, it no longer stays on the ground dealing damage; in fact, it stops dealing damage altogether once it touches any terrain. To compensate for this, its damage greatly increases by gaining levels. It can pierce through enemies and deal multiple hits to targets of great size, such as Final Guards.

If cast while a Gaibon Familiar is present, it will allow the Gaibon to use a spear of its own. Whenever Soma throws a spear, Gaibon will throw one in tandem, although both will land on the same spot. Each of the spears deals damage separately, which allows to inflict considerable amounts of damage it they manage to hit a target at the same time.

It can also be canceled by back dashing, allowing the player to throw at least eight spears per second for massive damage (but also at a considerable MP cost).

Javelin is one of Jonathan Morris's sub-weapon skills in Portrait of Ruin. It can be obtained from an Armor Knight and is essential for completing one of Wind's quests: "The Spear of Legend", which consists in "mastering" the Javelin by damaging enemies with it to collect Skill Points (SP) for the weapon (it is not required that the enemy is killed by the javelin itself, it only needs to be damaged at some point by it before being defeated). Completion of this quest will award the player with the Alucard's Spear.

Javelin from Symphony of the Night

Slogra soul from Dawn of Sorrow

Javelin from Portrait of Ruin

Mastered Javelin from Portrait of Ruin
Add a photo to this gallery
Retrieved from "https://castlevania.fandom.com/wiki/Javelin?oldid=322439"
Community content is available under CC-BY-SA unless otherwise noted.