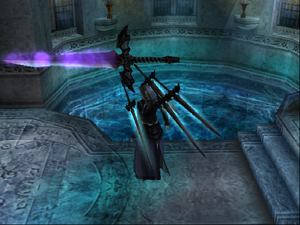 Joachim Mode is one of the two first alternate modes unlocked in Castlevania: Lament of Innocence, along with Crazy mode. In this mode, the player controls Joachim Armster.

After finishing the game as Leon, Joachim can be played by entering @JOACHIM in the Name Entry screen.

Like the other Alternate Modes of several games, Joachim has no access to weapons, items or equipment, making his overall gameplay harder than Leon. However, to compensate for the lack of key items, all secret doors are already unlocked from the start.

He is only limited to using several floating Symbiotic Swords for his attacks. First of all, his attacks can reach a longer range compared to Leon. However up to five swords can only be used at a time, and the player has to wait for a few seconds to ready up the swords for the next attack. Each sword can also be "charged" by holding down the square button. Charging a sword grows it in size with increased damage.

Joachim has two fighting "stances" which can be toggled using the Triangle button:

Joachim also has Special Attacks that consume MP, which are usable once he reaches certain MP thresholds (signified by a purple aura around him) and vary depending on the current stance. Joachim becomes completely invulnerable during these Special Attacks, and since he does not have a Guard ability, the MP regenerates every time his sword hit enemies or destructible candle stands.

Several floating blocks also appear in this mode, in order to compensate for his lack of the Whip-Jump ability of Leon. This also applies to areas that require specific relics, like the Wolf's Foot.

Joachim is immune to the Paralyze, Poison and Curse status effects, and the Rosario item has been replaced with the Bloody Skull which has the same effect of instantly killing all enemies in the room. Potions and Wine can be found in certain rooms that will restore a portion of Joachim's HP and MP respectively. But once, they are picked up, these will no longer respawn.

Joachim can become stronger by collecting various parameter-increasing items, which are mostly found inside secret rooms and some areas where Leon's Key Items and Equipment used to be. Most of these can increase his HP and MP bars. There are also Armor pick-ups which permanently increase his defense, but these are rarer than the two aforementioned items. Lastly, a Knife pick-up increases his overall attack power. These can be found in harder-to-reach areas, or dropped by bonus bosses.

How to play with "Joachim", page 1

How to play with "Joachim", page 2

Ending
Add a photo to this gallery

Retrieved from "https://castlevania.fandom.com/wiki/Joachim_Mode?oldid=268658"
Community content is available under CC-BY-SA unless otherwise noted.