The Silence of the Daylight

Jova (ヨーバの町, Yōba no Machi?) is the first town encountered in Castlevania II: Simon's Quest. Early basic items can be bought in this town once the player has acquired enough Hearts, including a Thorn Whip, Holy Water and a White Crystal. Simon can also heal his wounds at the church.

This town can be thought of as the "center" of Simon's Quest. Simon starts out in the upper left corner whenever he starts a new game or continues using a password. The town consists of three levels. The top is a single platform with a church in the center. The middle is segmented with shops at the east and west side. The bottom level is broken up by areas of water that Simon must jump over or fall to his death in.

To the west is the Belasco Marsh, which has some tough creatures for someone who only has a leather whip. In order to cross the marshes without taking damage, you will need some Laurels, which can be picked up two towns east in the Town of Aljiba. It leads to the Dead River.

The land of Transylvania in this game is divided by a great river that forks as it heads south (an island is in the middle of this fork). Jova is located south of the fork. To the north are some mountains and beyond that near the tip of the fork are the ruins of Dracula's Castle. There is no path directly between Castle and the town of Jova in the game though. The Dead River is the south-west fork of the great river, while the South Bridge takes you across the south-east fork of this river.

While villagers go about their business and may help Simon during the day time, at night they all hide in their houses and the streets are overrun by Zombies. It is not possible to enter buildings at night. These zombies are slower than Simon and can be killed with two hits with Simon's Leather Whip or Holy Water. Simon can take them out with a single hit with a Thorn Whip. Killing these creatures and taking their hearts is an excellent way to save enough to be able to buy the important items in this town.

Town rip
Add a photo to this gallery

Aljiba from Rondo of Blood 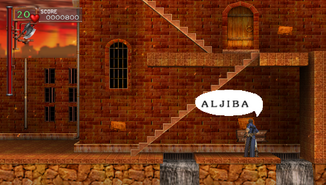 Retrieved from "https://castlevania.fandom.com/wiki/Jova?oldid=264553"
Community content is available under CC-BY-SA unless otherwise noted.