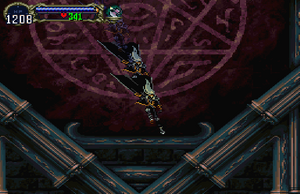 Not to be confused with Drop Kick.

A Jump Kick, also known as Comet Kick, is a kick which can be executed after performing a double jump, often by pressing ↘ (↙) or ↓ and the [JUMP] button while still in midair. If an enemy is struck in this manner, the character may bounce off of it and be able to perform another double jump, and thus another jump kick.

If the player is skillful in the use of this technique, they may reach otherwise inaccessible areas at an earlier point in the game.

In most games, the jump kick is available as soon as the Double Jump ability is acquired (which a character may start out with). Most characters who can double jump can perform a jump kick (Charlotte Aulin being a notable exception).

The Spiked Boots enhance attacks while kicking, while the Combo Boots increase damage dealt after each kick without touching the ground.

Symphony of the Night introduced the ability to perform jump kicks into the series. This skill is immediately available once the player obtains the Leap Stone in the Castle Keep.

Besides the common jump kick move, Alucard can also perform a variant of it by equipping a Fist weapon (barehanded included) and pressing ↓ + → + [ATTACK] during a jump.

In Aria of Sorrow, this ability is obtained by gaining dominance over the Kicker Skeleton's soul. Using this ability before using Flame Breath or Stone Breath can enhance the range of the first breath sprite.

In Julius Mode, Julius can execute a jump kick without performing a double jump.

In Lament of Innocence, the jump kick is known as Falcon Claw and it is one of Leon's skills. It can be learned by defeating 300 enemies, 45 of which must be from different types.

Contrary to how it was obtained in Aria of Sorrow, which required absorbing a separate soul besides the one which provided the double jump, in Dawn of Sorrow Soma can perform jump kicks as soon as he learns the double jump ability, which is obtained by gaining dominance over Malphas's soul.

The damage done by the kick is based on how long Soma is in the air before the kick hits an enemy. Getting high damage normally entails jumping off a high ledge and kicking at an enemy below, but the player can also easily maximize the damage by using the Medusa Head's soul, Vector ZERO, during the kick and then releasing it after a significant time has passed. At high damages, the kick produces a screen-shaking effect upon connecting with the enemy.

Richter and Simon Belmont can only execute jump kicks in this game, not being able to do so in any of their other appearances throughout the series.

The Lords of Shadow version of this move is the Stomp.

Alucard's Jump Kick from Symphony of the Night 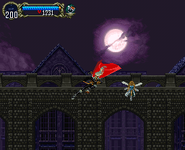 Comet Kick from Aria of Sorrow

Retrieved from "https://castlevania.fandom.com/wiki/Jump_Kick?oldid=270946"
Community content is available under CC-BY-SA unless otherwise noted.