Keshi is the Japanese word for eraser. In modern, it refers to a collectible miniature figure, often of a manga or anime character, made of colored hard rubber.

Three keshis were produced by Zoomos: one with the effigy of Simon Belmont in 2014, Kid Dracula in 2016 and Getsu Fuma in 2017. 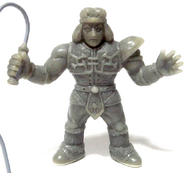 
Retrieved from "https://castlevania.fandom.com/wiki/Keshi?oldid=286071"
Community content is available under CC-BY-SA unless otherwise noted.