Kid Dracula (Dracula-Kun in Japanese) is a parody of Dracula's son. According to the manuals he is 10,009 years old. He is the main protagonist and playable character in the games he appears in Boku Dracula-Kun for the Famicom/Mobile Phones and Kid Dracula for the Game Boy.

In Castlevania Judgment there is a reference to Time Reaper being sent from 10,000 years in the future (an obvious nod to age of Kid Dracula).

It is speculated that he is really super-deformed version of Alucard, but this is not known for sure. However the references from the Time Reaper in Castlevania Judgment of Galamoth existing, 10,000 years in the future may imply that the games take place far in the future. This would fit with the existence of futuristic locations and items in the Kid Dracula games, including the statue of liberty, lasers, and robots. 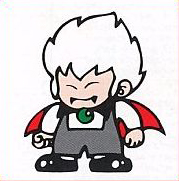 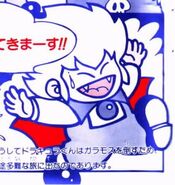 Kid Dracula in Super Famicom Jikkyō Oshaberi Parodius: Forever With Me
Add a photo to this gallery

Retrieved from "https://castlevania.fandom.com/wiki/Kid_Dracula_(character)?oldid=82810"
Community content is available under CC-BY-SA unless otherwise noted.