Castlevania Wiki
Register
Don't have an account?
Sign In
Advertisement
in: Directors and Producers, Writers, Novelists and Screenwriters
English

List of roles
Koji Igarashi (五十嵐 孝司, Igarashi Kōji?), also well known by his nickname "IGA", was a former Konami employee and producer of the Castlevania video game series. He is best known as the assistant director of Castlevania: Symphony of the Night and the producer of Castlevania: Dawn of Sorrow. He left the series for a while and then returned to produce Castlevania Chronicles, and has been in charge of the directing the series ever since. Contrary, perhaps, to the direction in which he has taken the series, Igarashi has commented on several occasions that his favorite Castlevania game is Akumajō Densetsu (Dracula's Curse).

He announced his new project, a Castlevania-like game called Bloodstained: Ritual of the Night, on May 11, 2015. The game was funded in a day via the website's Kickstarter.

IGA's portrait in Lament of Innocence.

IGA's coffin in Curse of Darkness.

"EGM: Would you make a Castlevania with a female main character?

IGA: Hm, there are difficult problems with that. As a gamer, I think that you become one with the character, and since Castlevania has a lot of male players, it's natural to have male characters. In Rondo of Blood, Maria was a silly, cute aside, but you still had Richter to make it serious. Plus, Mr. Hagihara (the director) had a playful sense of humor. He worked on Symphony as well, and he made the telescope part where, if you pan over to the left you can see a little mouse, and also where Alucard can sit down on the chair and prop his feet up.

EGM: After Tomb Raider, don't you think a female character is more acceptable?

IGA: It's possible I guess. Although, I purposefully left the Sonia Belmont character (from Castlevania: Legends for GBC) out of the official Castlevania chronology. (laughs) Usually, the vampire storyline motifs, females tend to be sacrificed. It's easier to come up with weak, feminine characters. I'll think about it more in the future, though. It's tough to fit a female hero into the early history of Castlevania, but as you move into the modern day, females can then more easily become a hero."

About games released in his absence

Since he left Castlevania after Symphony of the Night, many Castlevania games were created before he returned to work on Castlevania. Here are his thoughts on some of those at various times.

About Harmony of Dissonance

About Portrait of Ruin

About Rondo of Blood port

About Symphony of the Night port

About Order of Ecclesia

About new kinds of genres

About A 2D WiiWare or Wii game

About future remakes and ports

About other Castlevania merchandise 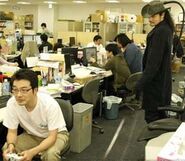 With Vincent Diamante and a part of the development team of Castlevania: Order of Shadows.

Koji Igarashi as The Boss.