Has her own DLC soundtrack

Kokoro Belmont is a character in the Gradius spin-off game Otomedius Excellent. She is a descendant of the Belmont Clan and its rightful guardian in the year 2011. She became available as a playable character as part of one of the game's DLCs.

She is voiced by Hitomi Harada.

Her Riding Viper —a small flying craft built with Gradian technology and linked to the mysterious but prevalent "Platonic Power"— is called Stavros (Greek for "cross"). With it, Kokoro is able to use most of the traditional Belmont sub-weapons. These come in the form of Holy Water bottles as her Missile, an Axe as her Double, and a Laser beam Cross.

Her Platonic Break "Lightning Sword" is a cross-shaped beam that looks to be a modified version of the Grand Cross, and borrowed from Deltatry from Gradius Gaiden, which is itself represented in her lone Trigon option unit.

Besides the aforementioned weapons, she has a dedicated slot for a Beam Whip laser, and is also seen fighting on foot using a whip in the opening and ending sequences, but any other weapons she uses while not in her Stavros are unknown.

Kokoro is very focused on upholding her family name and traditions. While fun-loving and friendly in civilian life, once the Bacterians invade she is all business, continuously reminding herself she needs to protect everyone and live up to her ancestors. She does not even allow herself to be upset when Dark Force destroys the Gradian fleet and her allies are crying or in shock; instead only musing that this must be her destiny. She notes upon entering the castle inside Dark Force's lair that her family has a history with such places, and she is seen entering Dracula's castle in the end credits epilogue. 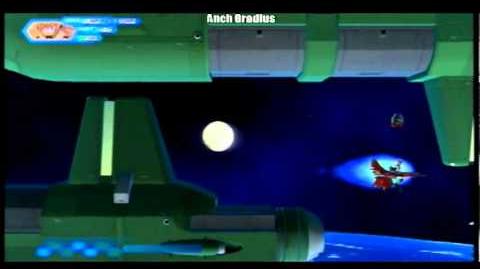