Konami Krazy Racers makes use of a variety of characters and concepts from several of Konami's franchises, including Castlevania, Metal Gear and Gradius. It plays similarly to the Mario Kart series, with eight characters per circuit and offensive/defensive items placed at predetermined points in the tracks.

Konami Krazy Racers plays similarly to other kart racing games. Each race begins at the starting line, where eight racers are lined up in certain positions. Each of the seven computer controlled characters are placed in the closest seven positions to the starting line and the player character always starts a circuit in eighth place. This placement may change in the next race of the circuit depending on how well the racers do. If the player places first, he or she will be in the first position, as the placement in the following races is based on how the racers did in the previous race.

The race is seen from behind the player and uses Mode 7 effects to simulate a three dimensional environment. A timer will count down to indicate the beginning of the race, and the player must hold down a button to accelerate at the beginning. The player can pick up coins off of the track which may be spent on items in a shop, and depending on the character the player controls, he or she may try to cause other players to spin-out. The player may use other buttons to do such actions as jump and brake, which aids in maneuverability.

Dracula has been risen from his grave in order to compete. The Castlevania related location in the game is the Magma Castle.

The Magma Castle courses are laid over a plain of lava surrounding the land near Dracula's Castle. The Magma Castle 1 track contains many hazards, including bats, spiked platforms, crumbling bridges and fireballs that jump out of the lava. Fortunately, the threat of falling into the lava itself is not a hazard, as there are bumpers around the track. The Magma Castle 2 track lacks most of these hazards but contains several tight and dangerous turns. The song Beginning plays in the background of both of these tracks.

Dracula's Castle in the distance and fireball hazards 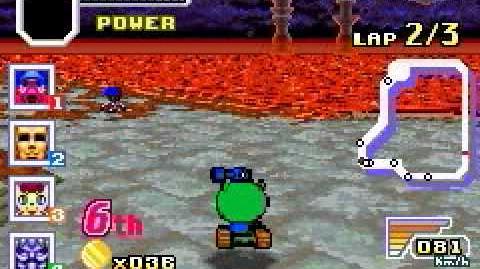 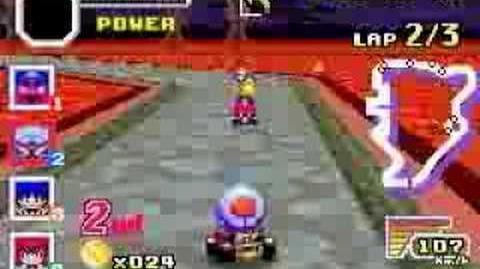 Konami Krazy Racers features a total of 12 characters, each with unique features, including weight, speed and acceleration.

Dracula is the only playable character from the Castlevania series in the game. He accelerates slowly but has a high top speed. His appearance is possibly a more comical version of his portrayal in Castlevania (N64), which was the previous Castlevania game to have come out and was created by the same branch of Konami. 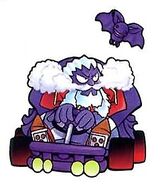 Dracula is the only Castlevania character in this game

Dracula from the cover art 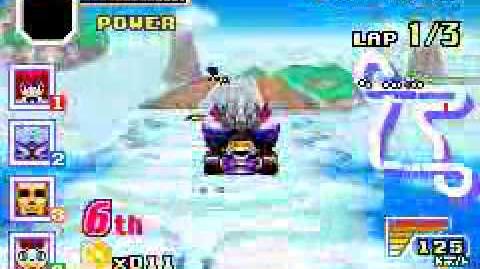 A sequel to this game, Krazy Kart Racing, was released for the iOS and Android mobile systems in 2009 and 2011 respectively. The gameplay premise and mechanics remain essentially the same, although this time using real time 3D graphics. The roster of playable characters remains similar to the previous game, with some additions of characters from newer Konami franchises.

Retrieved from "https://castlevania.fandom.com/wiki/Konami_Krazy_Racers?oldid=271823"
Community content is available under CC-BY-SA unless otherwise noted.