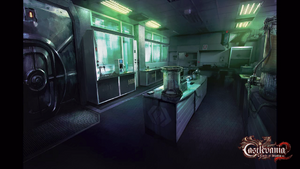 A classic mad scientist's realm in which helps the Castlevania eerie feel, it is noted and hinted that Doctor Frankenstein was once a resident of the castle before Carmilla took it for herself in the events before Lords of Shadow, this may imply why in earlier games a Laboratory was common and even more so why the Creature was a common boss or enemy. Normally, this area is an earlier area in the game or mid-game and often some hazards are posed such as electric wires or hard to reach areas, the actual chemicals would make one think this area would be abundant with items; sadly this is untrue. However, it is noted in more traditional RPG Castlevania games areas such as these usually hold a Potion or two. This area usually tends to hold common enemies.

Retrieved from "https://castlevania.fandom.com/wiki/Laboratories?oldid=264039"
Community content is available under CC-BY-SA unless otherwise noted.