The Succubus, Lilith, Lilim, Were-Bats, and some female vampires, are alluring or grotesque demonic bat-women that appear in Castlevania. Their mythological backgrounds may be slightly different, but they are often pallet swaps of each other. Some succubi are characters in their own right, though it is not clear if each appearance is the same succubus reincarnated or a different one, as they are only referred to as "succubus". Shanoa is also able to take the form of a were-bat.

Women turned to vampires by Dracula tend to take on the form of a bat, such as the Lesser Vampire in The Dracula X Chronicles, and Draculina in Order of Ecclesia. Women turned into vampires by other vampires are not shown with bat features, such as Rosa and Carrie's Cousin (presumably turned by Gilles de Rais), or Stella and Loretta (turned by Brauner). The only time one of the ancient female vampires (Carmilla and Elizabeth Bartley) are shown to possess bat-like features is Carmilla's battle form in Circle of the Moon. A bat-woman of unknown nature (possibly a lesser vampire or a succubus) is a boss in The Adventure ReBirth.

The Succubus first appeared in the series in a dream sequence for Alucard in Symphony of the Night, where she takes the form of his mother, Lisa, as she is being executed for being a witch.

Dracula's true form in Symphony of the Night contains a portion of the body of the Succubus.

The official artwork for the Succubus in Symphony of the Night (like all 2-D sprites in all games for succubi, Lilith and Lilim) portrays her nude bust. A censored version of the artwork was included as unlockable artwork in Castlevania Chronicles. The model of the succubus' NECA action figure contains extra fabric that covers her bust.

Symphony of the Night (LCD handheld)

An enemy that resembles Fake Sypha is possibly mislabeled as "Succubus" in the Tiger Electronics handheld version of Symphony of the Night. This may be because official artwork exists for the succubus but not for Fake Sypha. A similar mislabeling occurred for what appears to be Gaibon, which was called a Hippogryph, which also has official art which Gaibon lacks.

There are several enemies in Circle of the Moon that resemble flying bat-winged female demons. The Succubus is the most basic kind. More advanced kinds, like the Nightmare, Fallen Angel, Lilim and Lilith attack with rings arranged in a circle around them. Other similar enemies include the Harpy, the Siren and Camilla.

In Aria of Sorrow, a scroll hints that the succubus is considered one of three parts that make up Dracula's powers. The body of the second form of Graham Jones consists of the upper body of twin succubi. Beating this form with the succubus soul and the other two parts of Dracula's power is required for Soma to realize that he "is" Dracula, and then be able to get to the true ending of the game.

Some succubi will take the form of Mina Hakuba and plead for help while lying on the floor, to taunt Soma into coming to their rescue.

Some succubi will take the guise of Yoko Belnades in Dawn of Sorrow. If Soma jumps past them, they will attempt to kick him in this form. If he attacks, they will laugh and drop their disguise, revealing their true form.

Lilith will occasionally drop the Lilith Corset, which can be worn by Charlotte Aulin.

If Richter or Maria fail to rescue all of the trapped girls in The Dracula X Chronicles (including Annette), Annette will be turned into a lesser vampire and must be killed. 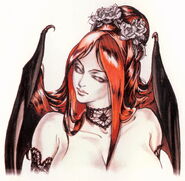 Succubus from Symphony of the Night 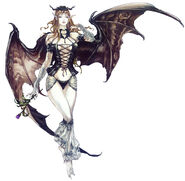 Succubus from Lament of Innocence

Succubus from the Lament of Innocence comic

Succubus from the Koma comic strips for Dawn of Sorrow

NECA action figure of the Succubus

Succubus from the Curse of Darkness manga 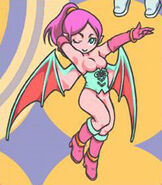 Lilith from the same illustration 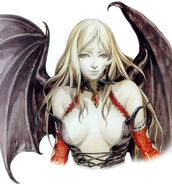 Succubus from Pachinko
Add a photo to this gallery

Retrieved from "https://castlevania.fandom.com/wiki/Lady_Bats?oldid=264664"
Community content is available under CC-BY-SA unless otherwise noted.