The Lady of the Crypt is a boss in Castlevania: Lords of Shadow - Mirror of Fate. It is fought by Trevor Belmont in Act II.

A giant, deformed insect which lures humans to their death using the disguise of a vulnerable human woman. It appears in Trevor Belmont's scenario. When Trevor encounters the Lady of the Crypt, he is tempted to get close to "her", but quickly realizes that he is being lured into a trap. He resists her charms and defeats the initial attacks of the apparent Lady of the Crypt, that being a pale, white-clad woman.

At the end of the battle, Trevor attempts to grapple with the pale woman using his weapon. The woman-creature turns out to be an angler-fish decoy, and a massive centipede-like beast emerges. Trevor is forced to relinquish the grip on his weapon in order to survive the beast's initial attacks. His Combat Cross is swallowed by his enemy, and he is forced to remain gripped to the massive creature in order to survive.

The Lady of the Crypt scurries through various underground tunnels while trying to dislodge Trevor. He gradually makes his way up to the head of the enemy, after dodging numerous obstacles at a speed that would kill him. At the head of the beast, using his own strength, Trevor rips the "Lady"'s limbs and body off of the larger portion of the main creature. The beast bursts through the ground and swallows Trevor, but he regains his Combat Cross and tears out of his enemy.

While the Lady of the Crypt monster is running forward, destroying large portions of the castle entrance bridge, Trevor uses his Cross to evade imminent danger and, finally, trip up the beast so that it crashes into the main entrance of the castle, and ultimately, be defeated.

30 years later, in Simon Belmont's quest, in the Castle hall lies the corpse of the Lady of the Crypt, as its skeleton can almost be seen through the large door. 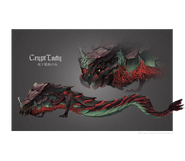 Retrieved from "https://castlevania.fandom.com/wiki/Lady_of_the_Crypt?oldid=249989"
Community content is available under CC-BY-SA unless otherwise noted.