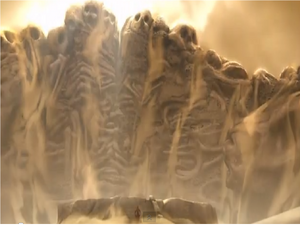 The Land of the Dead is the final region of Castlevania: Lords of Shadow. It is the residence of the final Lord of Shadow, the Lord of the Dead, and the area in which the final chapters of the game take place.

The Land of the Dead is a dismal, canyon wasteland, filled with ridges and pinnacles of rock. Further on, several caves appear, along with floating rock pillars and ethereal portals. A large, solid gate composed of rock and bones bars entry into this area; the only way to get inside is by means of "sacrifice" (using the blood of a god to open the gate). Just outside this gate is the Titan Graveyard.

Certain areas, such as the Fire Cemetery, appear to be volcanic; it is claimed the lava and fire come from "Hell itself". The inner rock walls resemble skulls and human faces. The sun barely shines on this realm, as it is mostly blocked by thick dust clouds. At the heart of the realm is the area where the third Founder of the Brotherhood of Light ascended into Heaven, and where the third piece of the God Mask is found.

Originally, according to Zobek's journal, the Land of the Dead was formerly "sacred", and had been the place where the third Founder of the Brotherhood had separated his body and soul. While his spirit ascended with the other Founders, his body remained behind and became the Lord of the Dead. It still contains the third and final piece of the God Mask.

After his creation, this Lord of Shadow embarked on a mission to conquer other areas using hoards of zombies and grotesque undead creatures. No one who has gotten there has ever survived; all of its residents are, understandably, dead or undead. Aside from the Lord of the Dead, Necromancers are the main governors of the region.

After completing Baba Yaga's music box challenge, Gabriel is transported by the old witch's magic to an underground location. Climbing up, the warrior finds himself in the first area, the Titan Graveyard, a swamp filled with the fallen bodies of the Titans, and teeming with undead enemies. Gabriel can use Titan Runes to manipulate the body parts of the fallen Titans to navigate the area.

Upon making his way to the massive gate closing in the Land of the Dead, Gabriel is met by Pan, who takes on a beautiful silver-armored form and commands Gabriel to fight him, despite the knight's reluctance. Pan removes Gabriel's Light and Dark Magic, then slowly returns it to the knight as they battle, to subtly teach him to alternate this power against enemies. Gabriel ultimately defeats and mortally wounds Pan, who admits when questioned he had challenged the warrior both with the intent to die and for Gabriel to use his blood as the "sacrifice" needed to open the gates. Thinking himself unworthy, Gabriel enters the Land of the Dead proper.

Scaling rock walls, Gabriel is soon met by the common residents of the realm: zombies. He defeats them and moves on. Coming to the Fire Cemetery, Gabriel is intercepted by a chupacabra, who steals his magic and equipment, then teleports itself inside a locked cage. To get back his items, the knight must manipulate pillars powered by Dark Crystals to reflect light, which breaks the face-shaped locks of the cage. Reclaiming his belongings, Gabriel races to the Crematorium, ringing two gongs to open the doors.

Entering, Gabriel comes face to face with the Gravedigger, a demon with an enormous shovel that places bodies inside the Crematory Oven. Cleaving the ground, the Gravedigger unleashes several Creeping Corpses and Creeping Coffins to deal with Gabriel. Destroying the minor creatures, Gabriel battled the demon itself, succeeding in taking its shovel and battering it into its own oven to die.

The Gravedigger, using its tentacles, tries to drag Gabriel into the oven with it, but using the broken shovel the knight is able to pry the demon off of him, and climbs out of the hellish furnace as the lava rises underneath him.

Gabriel departs the Crematorium and finds himself at the edge of the Necromancer's Abyss: an area of floating rocks and portals for navigating through the landscape. Initially entering, Gabriel uses a device to cause an eclipse, shrouding the land in twilight. Here the Brotherhood warrior encounters the more advanced members of the Lord of the Dead's arsenal: the Reapers and the Necromancers. Along with portals, red mirrors help Gabriel move further along the abyss, sending him to new areas. There are also puzzles to access other places.

Eventually, Gabriel comes to a cavern, where he meets and battles a Necromancer, successfully weakening it by killing the creatures it controls before destroying it. This reveals two more red mirrors, both of which Gabriel uses to activate a third mirror, which can only be accessed using the spirits of glowing corpses the knight finds along the way. Gabriel encounters and defeats another Necromancer, which reveals another mirror; Gabriel utilizes it to transport himself to the summit of the abyss.

Climbing up, the warrior is met by a third Necromancer, posing as the Lord of Death. It marks Gabriel out as a "hypocrite", comparing the knight to itself, as both "revel in death". So saying, the Necromancer summons the Dracolich: a skeletal dragon-like beast powered by runes that snatches up Gabriel. The warrior hangs on, crawling over the creature to bust the runes powering it to pieces to stop it. The Dracolich is brought down, but remains animated due to a final rune inside its mouth, which Gabriel, dodging the monster's fiery breath, also destroys to finally kill it.

Having brought down the Dracolich, the final piece of the God Mask reveals itself. However, as Gabriel reunites the pieces, restoring the item, Zobek appears, telling him it is time to "remove their masks", and reveals himself to have been the last Lord of Shadow, the Lord of the Dead. After putting on the Devil Mask, Zobek mortally wounds Gabriel after finally telling him the truth about Marie and Claudia's deaths, and how the warrior had been a pawn for the last Lord of Shadow to attain the God Mask for himself. However, as Zobek is about to claim victory, he is mysteriously immolated. A figure emerges, the fallen angel Satan, who reveals that he had been manipulating Zobek in order to obtain the God Mask and restart his crusade against God; so saying he takes the mask from Zobek's corpse.

Fortunately, Gabriel is revived from death by Marie, and confronts Satan. Angered by Gabriel's deduction about why he was thrown out of Heaven, Satan dons the God Mask and fights Gabriel, utilizing both Light and Dark Magic. Ultimately, Gabriel gains a hold of the Devil, who taunts him about Marie. However, the knight's faith in God holds fast, and he is able to defeat Satan and send him back to Hell.

This action breaks the spell confining souls to Earth, and Gabriel sees his wife's spirit a final time. She informs him that, contrary to what was said, the God Mask doesn't bring back the dead, but allows its wearer to see what God sees. Marie departs with the God Mask, leaving Gabriel distraught until he is called from the Land of the Dead by the vampire Laura to return to the Land of the Vampires.

Retrieved from "https://castlevania.fandom.com/wiki/Land_of_the_Dead?oldid=255025"
Community content is available under CC-BY-SA unless otherwise noted.