Legion is a recurring boss in the Castlevania series. He is referred to as "the one who is many".

The origin of Legion's design comes from a biblical account about a demon –or several demons– who possessed a man. The New Testament outlines an encounter where Jesus healed a man from Gadara possessed by demons while traveling, in an event that came to be known as "the exorcism of the Gerasene demoniac". The story has many variations; according to the Gospel of Mark, a man "possessed by a demon" comes from the caves to meet Jesus. Jesus approaches and calls the demon to come out of the man and asks him his name, to which the demon replies: "My name is Legion, for we are many." Thus, from the concept of being composed of "many" came the design of the shell composed of a large number of human bodies.

In most accounts of the story, however, it is a large number of demons who possessed the man. Listening to their pleadings not to send them away, but instead to send them into a herd of swine on a nearby hillside, Jesus consents, causing the swine to run down a hill into a lake and drown (other variants of the story have the demons allowed to run free and they enter the herd of swine on their own resolution).

The English localized name used for this entity in Castlevania: Symphony of the Night, "Granfaloon", has its origin on a concept found in Kurt Vonnegut's 1963 science fiction novel Cat's Cradle. In the novel, a "granfalloon" is defined as a "false karass"; that is, it is a group of people who affect a shared identity or purpose, but whose mutual association is meaningless. It is a satirical reference to a group of high-minded people who share a similar belief. The group is described by Vonnegut as "a proud and meaningless association of human beings". The Granfaloon in Castlevania would be a literal representation of this idea.[1]

In almost all of its appearances, Legion is depicted as a floating sphere that is protected by an outer shell composed of a massive gathering of innumerable humanoid bodies. This enormous lump of flesh conceals an inner core whose identity can vary depending on the game it is encountered in. In most cases, the shell must be broken apart piece by piece by striking it repeatedly before parts of the core can be exposed, and only by damaging it can the boss be defeated. In most portrayals of this enemy, when the shell is hit, pieces of it will crumble to the floor, these usually being either the bodies that conform its structure and which sometimes will aimlessly shamble across the floor in a zombie-like manner, or small and infectious maggots, or even harmless spurts of bodily fluids.

In most incarnations, the grotesque entity will move from side to side in an almost imperceptible motion, although never getting too far from its initial place at the center of the room. Its movements are so deceptive that they may take the player by surprise while they're focused in only inflicting damage, potentially resulting in them getting bumped with the massive weight of the monster and receiving a considerable amount of damage.

Legion is found as the boss of the Catacombs. The shell has nine parts (arranged like spaces on a tic-tac-toe board), although just by destroying the center section is sufficient to expose the core. The shell "attacks" by dropping bodies which fall to the ground and then walk aimlessly like zombies. If Alucard is closest to a non-destroyed portion of the shell, Legion will occasionally let out a growl and then a scream, followed by a shower of bodies raining upon him. If the portion of the shell Alucard is closest to is destroyed, then the newly exposed core tentacle (out of eight) will start firing off powerful laser beams instead.

Legion can be defeated without first destroying all nine shell parts (eight (inter)cardinal directions and one directly covering the core), but if all shell parts are destroyed, then inbetween single laser shots, Legion's tentacles will also fire off sets of homing laser shots that are very difficult to avoid.

Legion's appearance in Symphony of the Night.

The Legion found in Circle of the Moon is very different from the rest of his other incarnations. For starters, it is a lesser enemy, not a boss. Instead of being a composed of many full corpses, it is smaller and is only composed of an amalgamation of heads. It's still relatively large, however, has a rather deceptive high mobility, and will inflict Curse status on contact.

Nathan fights many of these in the Observation Tower.

In Harmony of Dissonance, there are two Legions:

Legion (saint) is found in the Sky Walkway in Castle B. It is similar to the Symphony of the Night Legion, although this time it only has four parts and destroying any of them will expose the core. It hovers in midair via six angelic wings (or probably twelve, each arranged in a pair). Unlike the Symphony Legion, Legion (saint) does not drop any bodies and will instead occasionally produce smaller versions of itself which will then fly toward the player for physical damage, as well as inflict Curse status on contact. Destroying the shell will reveal a small core with three tentacles which can periodically shoot dashed laser beams.

Legion (corpse) is found in the Skeleton Cave (a catacombs-like area) in Castle A. Instead of a shell of bodies, this Legion is protected by a shell of bones, mostly human skulls - a shell that is actually indestructible. However, hitting this shell sufficiently causes it to open and reveal a bobbing-head skeleton at the bottom of it (along with a graphical touch of flies escaping), and this skeleton is its actual weakness. The skeleton must be hit repeatedly quickly enough or the creature will attempt to close itself again. If the shell is to any degree open, it will also drop strange-looking maggots that crawl slowly along the ground toward the player. Also, notably, even well into its death animation, Legion will still stay onscreen, damaging the player if it touches it during this time (contact confers Curse status, as well as damage to Juste and Maxim; Simon Belmont cannot be cursed).

Similar to its depiction in Symphony of the Night, Legion is an amalgamation of featureless bodies, this time arranged to resemble a fetus during a sonogram, surrounding a tentacled golden cage containing a demonic fetus.

It can be found at the end of the Underground Cemetery, after Soma tracks its shambling husks through the level to a large, square room. Once Soma enters the room, the last of the bodies are sucked into the sphere and Legion awakens.

Legion slowly chases Soma around the rectangular circuit of the room, occasionally shedding husks. It consists of four shells parts and a core. Each of the shells has 5,000 HP, 55 ATK and 0 DEF. While the core can be damaged without destroying any of the shell parts, the boss's soul, Legion Laser, will not drop unless all the shells have been completely destroyed before the boss perishes. As the shells are removed, the tentacled core will begin firing lasers at Soma, and if the shell is entirely removed, the core will gain the ability to infrequently retract the tentacles and rapidly bounce around the circuit.

Once slain, Legion's central cage will shatter and release the demonic fetus, which will either immediately die in a burst of flames if defeated while still having one or multiple shells attached, or float up, open it's eyes, and vanish in a small circle of light if defeated after destroying all the shell parts, yielding its soul.

Legion was brought back along with the Puppet Master by the remnants of Graham's cult during a partial eclipse. He created an imitation of the castle from Graham Jones' time by using bodies of humans, as well as other monsters, and which was disguised by Count Olrox. Everyone killed in the castle was assimilated by it.

This version of Legion had limbs at the center of the castle. Part of it was destroyed by Michelle Danasty and it was finished off by Julius Belmont.

Legion is fought in a tall room, seemingly composed of flesh, under Garibaldi Temple. The mass hovers in the middle of the room and is reached by climbing a spiraling walkway protruding from the wall. Legion itself does not attack in any way, but featureless zombies will infinitely rise from the floor and explode if they come into contact with the player (for around 200 damage at Level 50).

When Legion is defeated, it releases a giant translucent white humanoid with an exposed heart known as Nuculais. Nuculais is one of the hardest bosses in the game and has many attacks, including turning into a mobile pool of lava, throwing the aforementioned zombies at the player (which explode on contact), and a powerful charge attack by turning its hands into blades.

Graphically ported from Symphony of the Night, in Portrait of Ruin Legion appears as the boss of the Nation of Fools. Like his counterparts from previous games, he is protected by a core made with the bodies of innumerable men which fall and pace on the ground when the core is attacked. Legion himself is a grotesque flying being with bearing nine tentacle-like limbs.

He cannot be defeated without destroying his outer shell first. Even if the player concentrates their attacks on the core, all sections will eventually fall anyway, revealing the monster himself. In this form, Legion will not only fire the blue lasers seen in other games, but it will also spin slowly and launch fire under pressure from the tentacles.

Legion reappears as the boss of Chapter 8: The One Who Is Many. Once gain, he retains his appearance of Symphony of the Night but resumes his attacks from Portrait of Ruin. His theme is Poetic Death.

This time, his spinning-launching fire is a bit more difficult to avoid, due to the somewhat unpredictable rotation of the tentacles.

Legion reappears as a Vital Soul boss. It was left significantly stronger thanks largely to Hermina's meddling by rewriting the text, resulting in the 1797 version of Maria Renard being left in grave danger. After its defeat, Alucard, upon gaining its Vital Soul, ended up encountering Soma Cruz, who apparently succumbed to his true nature as Dracula before Hermina revealed herself.

Legion appears in Season 3 of the animated series as a giant mass of humans controlled by the Magician. It is destroyed by Isaac when he kills the Magician.

Legion (corpse) from Harmony of Dissonance. 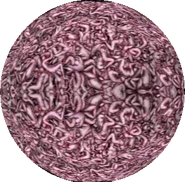 Legion from Curse of Darkness.

Unused portraits of Legion Zombie from Curse of Darkness.

Granfaloon's enemy list entry from The Dracula X Chronicles version of Symphony of the Night.

A mass of bodies formed by the Magician in the Castlevania animated series that strongly resembles Legion.

The Compound from Final Fantasy XIV.