"I see you!"
— Lerajie when she detects the player in Portrait of Ruin

Lerajie is an enemy in the Castlevania series. She is an evil hunter who uses ricocheting bullets to kill from afar.

Leraje has his origins as a demon in the medieval grimoires. One of Leraje's earliest known appearances as a demon is from the Pseudomonarchia Daemonum (1577) as Loray or Oray. Most of the information from this book appears to have been copied by the author of the Ars Goetia (mid-17th century), a section from the book Lesser Key of Solomon.

Leraje is the 14th demon listed in the Ars Goetia and is described as a mighty Great Marquis of Hell who commands thirty legions of demons. He causes great battles and disputes, and can cause arrow wounds to develop gangrene.

The name Leraje appears to be derived from the angel Leyraiell from the Liber Juratus Honorii or The Sworne Booke of Honorius (13th century or earlier). Notably, Leyraiell is not mentioned to be a fallen angel, but appears to have received the label of demon in later grimoires.

How exactly Lerajie's appearance in the Castlevania series was inspired is uncertain, but her using a musket and having a green skin tone may be a reference to Leraje's depiction as a handsome archer wearing green clothes and carrying a bow and arrows in the various grimoires.

Lerajie, Persephone, and Larva from a special wallpaper available at the Portrait of Ruin web site 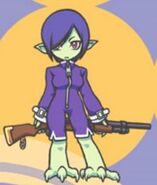 Lerajie's illustration from Portrait of Ruin

Retrieved from "https://castlevania.fandom.com/wiki/Lerajie?oldid=265223"
Community content is available under CC-BY-SA unless otherwise noted.