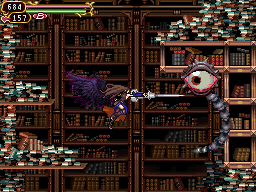 Libraries are a recurrent environment in the Castlevania series. They are large halls inside of Dracula's Castle where a vast collection of books is stored.

Following the trope of classic horror films where a large and lugubrious library full of dirt and cobwebs holding books from many ages past is found inside a haunted castle, it's no surprise that these kinds of environments were eventually portrayed in the Castlevania series. The first library-themed stage appeared in Super Castlevania IV, in the initial section of the Unliving Quarters, and since then this type of environment has become a staple in the series.

Libraries in the Castlevania games are generally elegant halls many stories tall where an astoundingly vast compendium of books are stored along the many bookshelves that fill each floor of the building. One can only imagine the treasure in knowledge these books hold within their pages, from very banal themes to books that deal with forbidden themes such as the occult, spiritism and necromancy.

It's implied that the origin of these books could be from being collected from various places in the world, as well as different periods in time, alternate timelines, and even other dimensions, as the castle is capable of moving through time and space, and Dracula himself, being an adept alchemist many centuries old and always thirsty for knowledge, could have sought to collect them throughout his many journeys.

Diverse types of enemies can be found inhabiting the castle's library; however, the most prominent ones are moving suits of armor, ghosts, and above all and keeping with the place's theme, magic books. Magic books are giant books that usually come out from the shelves in the background and start to levitate about; they attack either by swooping at the player or sometimes by opening their pages to let out a series of sharp weapons with which they stab any intruders.

In Super Castlevania IV, these books are not harmful to the touch and instead act like floating platforms the player can step onto to progress through the level.

Retrieved from "https://castlevania.fandom.com/wiki/Libraries?oldid=264040"
Community content is available under CC-BY-SA unless otherwise noted.