For the original timeline version of this character, see Lisa.

Adept in the study and appliance of medical science

"They won't be peasants anymore if you teach them. They won't live such short, scared lives if they have real medicine. They won't be superstitious if they learn how the world really works."
— Lisa in "Witchbottle"

Lisa of Lupu, later known as Lisa Ţepeş (リサ, Risa?), is a character in the Netflix original series, Castlevania. She is the late wife of Vlad Ţepeş and mother of Adrian.

She was voiced by Emily Swallow in the English version of the show.

In 1455, Lisa sought out Dracula in his castle. Others told her that the man who lived there held secret knowledge of science beyond that of mortals. After exhausting all of her other resources, she sought Dracula to learn from him. In so doing, she showed him some worthiness in mankind. He was greatly influenced by her, opting to travel the world as an ordinary man to learn more about humanity.

In the following years, Lisa and Vlad were married and had a son, Adrian. They moved to a cottage outside the city of Targoviste, Wallachia, where Lisa continued her research into medicine and served the locals as a doctor.

Lisa soon established herself as the main doctor in Targoviste, displacing the local "wise woman" who had previously treated patients with dubious treatments. Though popular among her patients, the wise woman was angered and tipped off the church of potential wrongdoings.

In 1475, Lisa was arrested by the Bishop of Targoviste on suspicion of being a witch, the medical implements and supplies in her home being mistaken for "witchcraft". Her home was burned to the ground as she was dragged to the square in Targoviste, where the bishop had her burned alive at stake. Even as the fire burned around her, she called out to Dracula, begging him not to take vengeance upon the people of Wallachia, for they did not know what they were doing.

Sadly, her husband did not hear her. Vlad just returned to the remains of their home shortly thereafter, encountering an old woman named Djuvara carrying flowers. He learned from her, whom Lisa helped cure, that Lisa was being burned at stake for being a witch. Mrs. Djuvara had come there to pay her respects because she couldn't bear the sight of watching Lisa being burned alive. In his anger, he ordered Mrs. Djuvara to flee Wallachia with her family that very night, in honor of the woman he loved and who tried to teach him to care for humanity.

Moments later, Dracula's visage appeared in smoke and flames in the square, where his wife had crumbled into ashes, passing judgment on all of humanity, swearing to wipe out all people in Wallachia for their crimes. He would grant them one year to make peace and remove their mark from the land, and then he would kill them all.

In 1476, one year since Lisa's death, Dracula unleashed an army of demons and monsters upon Wallachia. In a festival where the arch-bishop of Targoviste celebrated the death of the "witch" and the appearance of the "illusion of the devil", Dracula appeared and caused the deaths of everyone living in Targoviste, then set about sending the horde across the land to wipe out all human life in Wallachia. Her death was the beginning of a dark and bloody age where Dracula swore a war of extermination on the human race in vengeance for the unjust murder of his beloved wife.

Meanwhile, her son, Adrian, was recovering from injuries sustained after opposing his father. He slept in his sanctum beneath Gresit, awaiting the arrival of a hero and a scholar who would help him honor his mother's memory and save humanity from his father's vengeance. Their son, the greatest gift she ever gave Dracula, was what finally killed and allowed Dracula to reunite with his wife in the afterlife, which would not have been possible had Alucard not reminded Dracula he wanted to die ever since Lisa died, and also Dracula being tearfully reminded that Alucard was his and Lisa's son and the only thing he has left of her.

Three months after the defeat of Dracula at the battle of Braila, many of Dracula's followers form splinter groups and cults, attempting to collect the arcane power needed to resurrect him. Many of these cults are thwarted by the efforts of Trevor Belmont and Sypha Belnades, although one attempt bears fruit. The scholar and alchemist Saint Germain, unknowingly being manipulated by the spirit entity known as Death, opens a portal to Hell using the Infinite Corridor and pulls the souls of Dracula and Lisa into a singular body in an attempt to create a Rebis, which he could use to control the Infinite Corridor. After learning of Death's true intentions, Saint Germain helps Alucard, Trevor and Sypha destroy the Rebis, thwarting Death's plan and setting the spirits of Dracula and Lisa free.

Following the destruction of the Rebis, Dracula and Lisa wake up in their original bodies, in the middle of a field somewhere in Europe. The two check into an inn, where Dracula reflects on his actions following Lisa's death in Targoviste, stating that she is the only one who is able to fix him. They decide not to immediately return to the castle and instead travel to Whitby, England, presumably to live a normal life. It's made clear that the couple intends to eventually return to Alucard, but they wish to give him time for proper closure after all that has happened.

Lisa was a tall woman with a slim figure. She had wavy blonde hair, crystal blue eyes, and red lips. Her son strongly resembles her beauty with his blond hair and facial features. Lisa's attires consisted of casual layered clothes, which become slightly more elegant since her marriage.

"I'm really not interested in superstition, or being some muttering wise woman cheating people with boiled nettles and entrails. I want to heal people. I want to learn. Will you help me?"
— Lisa to Vlad Dracula Tepes in "Witchbottle"

Lisa was a kindhearted and exceptionally altruistic doctor who did anything she could to improve the lives of her fellow people. It is safe to say she saw that scientific knowledge could make the lives of humans less short and miserable. This awareness didn't always sit well with others, as she was often called a witch for her pursuit of knowledge. This never stopped Lisa from loving humanity, and she went to extraordinary lengths to be of help in any way she could, specifically by becoming a great doctor. Sadly, Lisa underestimated the cruelty and dogmatic fanatism that some humans possess. This cost her her life when she was burned to death as a witch. She ironically died a Christ-like death at the hands of the church. In her final moments, she shouted to her absent husband, hoping he could somehow hear her. She begged that Dracula forgive humans and be better than those who killed her.

As she lived in a dogmatic and intolerant time, learning more about the world was difficult, so Lisa quickly exhausted conventional learning options. This left her with one lead, rumors of a dangerous entity that possessed unusual knowledge. Lisa's decision to visit Dracula proves that she is both extraordinarily brave and full of conviction. Most people would never think of knocking on Dracula's door. Her bravery is further proven as she has a civil conversation with Dracula despite his threats of violence.

When Lisa meets with Dracula, the two quickly develop a strong mutual attraction, as both of them had never met anyone like each other before: Lisa is attracted to Dracula because of his astounding knowledge and his acknowledgment of her and her desires. She saw the best in Dracula, his potential for bringing great wisdom and goodness to the world, and always encouraged this. As a firm proponent of gaining knowledge, Lisa would often encourage Dracula, her soon-to-be husband, to travel and see the world. Although she bid him travel, she would miss her husband terribly during his absences. Dracula himself seemed to appreciate her encouragement, though his later actions imply that he never was able to see other humans the way Lisa wished he would. When captured by the Bishop, Lisa demonstrated that she knew exactly how Dracula would react. She was terrified of what he was capable of if she was taken from him, though she knew he would not be at fault for his fall into monstrosity.

Lisa was a very loving wife and mother, adored by her family. She and Dracula would make toys for Adrian and share with him their knowledge. She was unhappy that those who observed Adrian came to call him Alucard due to his nearly opposite disposition to his father because she wanted her son to be free to define himself and not by his father. Adrian truly appreciated his mother's gesture and lived by it until fate put him in opposition to Dracula and his insane scheme to wipe out humanity. Adrian accepted the name his mother hated, Alucard, aware of the irony that to do what she would have wished, he had to accept a role she would not have wanted for him.

Despite Dracula's previous actions, Lisa proved her reasonable and forgiving heart and spirit by being fully willing to be with him in death. After their revival, Lisa and Dracula decided to start a new life in England and temporarily leave Alucard to the life he was living to give him time to get closure: Though saddened by the prospect of having to let her son keep mourning her loss, she stated he needed some time to himself and had every intention of returning to his life when the time comes. 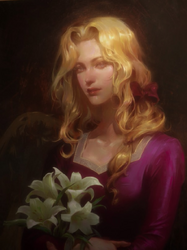 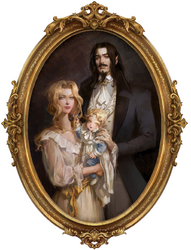 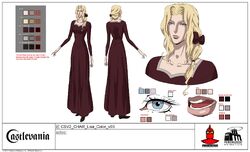 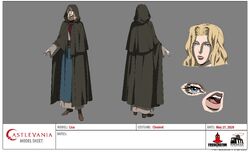 Model sheet for Season 4 by Katie Silva and Sam Deats (base design). 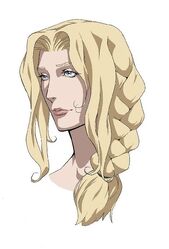 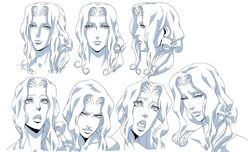 Lisa being held by priests before her execution.

Burned alive by the Bishop's orders.

Dracula and Lisa reunited in Hell.