The Lizard Man is an enemy in the Castlevania series. They are a half-man, half-lizard sub-human species, stronger than an average man and with a hide made of hard scales said to be thicker than armor.

They tend to move around in groups and are skilled at hunting in packs. They are relatively intelligent, and are usually armed with battle axes and shields.

Lizardfolk are a fictional humanoid species in the Dungeons & Dragons fantasy role-playing games, having appeared in every version of the game to date.

They are described as aquatic monsters with a rude intelligence, that are fond of eating human flesh.

Lizard Men are one of the few enemies which were more prominently introduced in Castlevania (N64) (along with several other types of beast-men) which later became staples of the Castlevania series. They are intelligent beings who usually wield a weapon and a shield.

One of these creatures' common traits is the ability to become completely impervious to attack when hiding behind their shields, forcing the player to wait or attack constantly until they let their guard down.

Due to their similarities, Lizard Men have been often confused with Mermen, and in fact their names have been interchanged between each other in both Japanese and western releases in some occasions.

In most games these enemies appear in, three variants are usually featured, although there could be more depending on the game. These include:

First appearance of Lizard Men in the series. They are encountered in various stages throughout the game and function as a miniboss battle of sorts. They jump high in the air continuously while tossing a pair of daggers downward.

In this particular case, it's not very clear if this enemy is in fact a Lizard Man or a Merman. It was originally called "Lizard" in the Japanese version of the game, although artwork in the instruction booklet clearly shows it with fish-like features, including fins. Perhaps because of this, it was renamed as "Merman" on the western release. Adding to the confusion, another enemy in that game, the Fish Man, who physically seems to have more in common with a lizard man, was renamed as "Water Creep" in the western release.

Lizard Men were more prominently featured in both Nintendo 64 games, becoming one of Dracula's main forces in certain levels.

In Castlevania, they start appearing in great numbers once the player reaches the Underground Waterway. They attack by suddenly jumping out of the water, armed with either a falchion or hatchet and wielding a small shield, and engaging in combat with different techniques depending on the color of their skin:

More Lizard Men can be encountered later in the Castle Center, where they continuously emerge from some strange-looking machine pods, making one wonder if they are teleported from their world into this plane, or if they are the result of some weird scientific experiments.

In Legacy of Darkness, Lizard Men make an even more prominent appearance, being the very first enemies the player encounters in the game. It shall be noted, though, that these particular enemies are in fact Gill Men (Mermen) and that only their names were changed in the western release of the game.

Once reaching the Underground Waterway, the real Lizard Men start appearing. Their role is pretty much the same as in the original game, although their design and color schemes have been given an overhaul, making them look more detailed this time around. They can also be encountered in a couple more stages in this game.

Both games feature a unique Lizard Man who had been changed from a human by a machine. His name is Heinrich Meyer, and for some unknown reason he was able to maintain his intellect and ability to speak. He gives Reinhardt and Carrie hints on how to use the magic elevator.

They are extremely slow but raise their shields frequently, becoming completely invulnerable and allowing other enemies to gather on their position. A good strategy to avoid this, is by jumping first and striking them on the way down, as attacks performed directly in front of them are what trigger them raising their shields.

They come armed with spears and will stab with them for a mid-ranged attack, although not very frequently.

Three variants of Lizard Men appear in Harmony of Dissonance:

Three variants of Lizard Men appear in Lament of Innocence:

Three variants of Lizardmen appear in Curse of Darkness, each one with different attack techniques:

Two variants of Lizardmen appear in Order of Ecclesia:

The Lizard in ReBirth is similar to its incarnation in Belmont's Revenge (called Merman in the US), which is different from its more recent appearances. Instead of walking back and forth, and attacking when the player gets near, it will immediately jump into the air and toss three swords. It repeats this until killed. 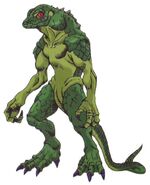 Unused portraits of Lizardman from Curse of Darkness

Unused portraits of White Gravial from Curse of Darkness

Retrieved from "https://castlevania.fandom.com/wiki/Lizard_Man?oldid=291081"
Community content is available under CC-BY-SA unless otherwise noted.