"My sons will feast on your corpse once I finish with you!"
— Cornell about his Lycanthrope army.

Lycanthropes are one of the three main races/groups lead by the Lords of Shadow. They are ruled by the Lycanthrope Dark Lord Cornell.

When the spirit of Cornell left his body, all of his strength and anger was left behind giving birth to the Lycanthrope Dark Lord.

Lycanthropes come about in two possible ways. The first are humans that have been poisoned with an infectious disease known as the 'Werewolf Influenza', which is transmitted, in most cases, by the bite of another Lycanthrope. There is an old saying that goes like this, 'If you are bitten by a Lycan, better to let it gnaw,' and like most proverbs, it is probably true. Once infected with the disease, the transformation process can be completed in only a few minutes, after which the victim's mind will have been replaced with the savage instincts of a ruthless predator.

The second are those spawned from the Dark Lord himself, the Greater or 'pure blood' Lycanthropes. In these cases, their condition is not considered a disease, as the transformation process has been deliberately chosen. The endowment of lycanthropy, however, is not given to just anyone by the werewolf Dark Lord, and only a handful of his more loyal acolytes have received such a gift. The Dark Lord keeps these elite guards for special missions, and they are not only fearsome, but incredibly intelligent and formidable foes in combat.

Apart of the Lycanthropes, there are the Wargs, although they seem to be like a species apart from the Lycans, mostly because wargs completely preserve their animal part (walking on all fours, a more wolf-like form), while the Lycanthropes are more 'humanized' (more intelligence, walking upright) that their more bestial kin. In fact, Wargs didn't appeared until the arrival of Cornell, so their origin could be explained in this way: they were originally wolves but thanks to the influence of the Dark lord, they were transformed into a more bestial and huge wolf form, and finally the Great wargs, which are simple wargs, but blessed by their Dark Lord, making them even stronger and bringing them special new powers like: regeneration and improved strength.

After the death of Cornell at the hands of Gabriel Belmont, the Lycanthropes were left without a leader. However, once Gabriel re-emerged as the vampire Dracula, the Lycans (now called werewolves) recognized the Prince of Darkness as their new Alpha. From then on, the werewolves made Bernhard Castle their new home. They would later be responsible for the death of Sypha Belmont.

By the modern era, the Lycanthropes had eventually died out. According to one of City Memorials, the museum of Castlevania City featured exhibits of the supernatural species that had been driven to extinction by the Brotherhood of Light, one of them being the Lycanthropes.

Werewolf from Mirror of Fate 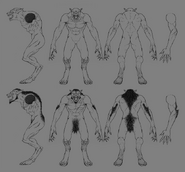 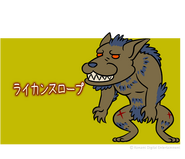 Greater Lycanthrope from Lords of Shadow

Retrieved from "https://castlevania.fandom.com/wiki/Lycanthrope?oldid=283067"
Community content is available under CC-BY-SA unless otherwise noted.