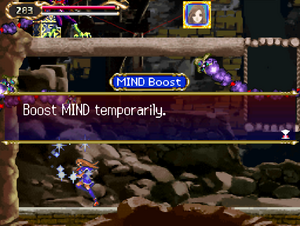 MIND Boost is a spell or power that increases Mind.

Fides Fio is a back glyph that increases Shanoa's mind. This bonus scales as her MND stat increases, and thus, grows in power as she levels up.

In Harmony of Despair, Soma Cruz is able to use this ability from an Aliorumnas's soul. The more such souls he has, the more powerful the effect.

MIND Boost from Portrait of Ruin

Retrieved from "https://castlevania.fandom.com/wiki/MIND_Boost?oldid=293757"
Community content is available under CC-BY-SA unless otherwise noted.