The Mad Diver, also known as Evil Stabber or Assassin Zombie, is an enemy in Castlevania: Lament of Innocence and Castlevania: Curse of Darkness. It is a zombie with long claws that travels freely underground.

A bloody corpse boasting very large and sharp claws for fingers and with parts of his body wrapped in bandages. The Mad Diver hunts his victims by burrowing himself whole into the earth and then moving freely underground, eventually launching himself back to the surface for a surprise attack.

He appears in both PlayStation 2 games, Castlevania: Lament of Innocence and Castlevania: Curse of Darkness, with his attack methods remaining almost unchanged between both titles and his aspect only featuring some slight differences.

In Lament of Innocence, the Mad Diver's body is slim and fragile-looking, although he's actually quite agile. His main attack consists in burrowing himself underground, sticking his claws out of the surface and moving at fast speed in an irregular manner, making repeated passes at the player.

The Evil Stabber is a stronger variant of this enemy and his skin is rotten green instead.

In Curse of Darkness, this enemy is known as the "Assassin Zombie". In this game, he's much more muscular, but overall retains almost the same physical traits.

He enters the screen already burrowed underground and jumps out to the surface in an attempt to knock down the player; however, he often misses this attack and it instead puts him in a disadvantageous position, where the player can usually deal the first strike. He also retains the moving-claw-sticking-out-of-the-ground attack from Lament of Innocence, although he doesn't use it that often. Sometimes, when knocked down, he'll quickly stand back up with a jumping clawing overhead swing. One of his new attacks consists in a double-handed clawing stab which inflicts Poison status if it connects.

The Assassin Zombie drops the rare Jade material, which is essential for crafting the Stone Mask (and eventually the Masakado's Helm, the best headgear in the game). However, the drop rate is extremely low and it can take a very long time before one is dropped, even if equipping advanced LCK-boosting gear and Innocent Devils.

He opens his stealing window just after he falls back on the ground after bursting out from it. Successfully stealing from him yields 200G. 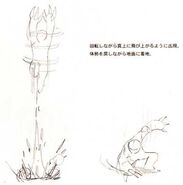 Assassin Zombie's concept art from Curse of Darkness.
Add a photo to this gallery

Retrieved from "https://castlevania.fandom.com/wiki/Mad_Diver?oldid=306615"
Community content is available under CC-BY-SA unless otherwise noted.