Symphony of the Night
The Dracula X Chronicles

The Magic Book is either an item or an enemy in the Castlevania series. They are tomes containing the secrets of magic, weaponry or literature.

Magic books can be used by a hero to summon some kind of magical effect, weapon or creature out of its pages, or they can also be possessed volumes that move and attack on their own.

The first spellbooks found in Castlevania were those used by the Belnades family and their relatives. Sypha Belnades can use different spellbooks to perform either Fire, Ice or Thunder spells as sub-weapons in Dracula's Curse.

Juste Belmont can use them to cast Spell Fusions, powering up his sub-weaponry and giving them elemental effects.

Charlotte Aulin can use them to summon different kinds of weapons or creatures as her primary means of attack. Little Witch uses them as a blunt object which she can swing around as her primary weapon.

Self-propelled floating enemy books first appeared in Super Castlevania IV, which could "flap" their pages to hover over the ground and then make swooping attacks. The Spellbooks and Magic Tomes from Symphony of the Night come out from their shelves, move slowly toward the player and then open their pages to reveal atrocities with which to attack them.

A Super Castlevania IV-like spellbook can also be found on the Ouija Table that makes up the Poltergeist enemy in Circle of the Moon.

Only present in The Unliving Quarters during the long stairs-descent. They "flap" their pages to fly over the ground and make swooping attacks on Simon.

There are two types of magic books, both present in the Long Library. When destroyed, both types turn themselves as mysterious letters come out of their pages:

Comes out of its shelf, moves slowly toward the player and opens its pages to reveal a skull with which to hit them.

Appears only in the room where the Faerie Scroll is located. It moves quickly around the player and opens its pages to reveal and array of rusty weapons which it uses to stab them.

A Super Castlevania IV-like spellbook can be found on the Ouija Table that makes up the Poltergeist enemy.

Three Magic Books conform Sypha Belnades' sub-weaponry in this game. These are:

Spell Books are found inside of breakable walls. Collecting it will cause one of two different effects which happen at random; either the player will get thirty Red Jewels or a third Coat of Arms power-up effect, powering up the characters' main weapon to its fourth degree.

When combined with subweapons, they allow Juste to cast Spell Fusions, which are powerful spells with a variety of effects.

Tomes are magic books used as weapons by Charlotte Aulin. While they lack physical power compared to Jonathan's weaponry, they compensate this by being an early source of elemental melee attacks and/or having extra vertical range. Besides, they are one of the fastest melee weapon classes in the game. 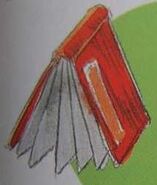 Retrieved from "https://castlevania.fandom.com/wiki/Magic_Book?oldid=323370"
Community content is available under CC-BY-SA unless otherwise noted.