For other uses, see Crystal (disambiguation).
Not to be confused with Crystal (power-up) or Orb.

Capture from Boss Character at the end of each level to earn time bonus and restore lost power.

Generally, at the end of a level

The Magic Crystal first appeared in the original Castlevania. It usually shows up whenever a stage has been cleared after defeating the area boss and has the power to restore a hero's health to top condition. In the classic titles, it usually triggers a "Hearts" and "time remaining" bonus counter to start, where the player will be awarded a certain amount of bonus points for every Heart and second remaining at the end of the level. The player's Heart counter is usually reset to 5 or 10 Heart Points when the next stage starts, but in some cases they'll retain all their Hearts from the previous level.

The original Castlevania introduced the apparition of the Magic Crystal, which would then become a staple in the series. The Magic Crystal materializes out of thin air in the middle of the room after Simon defeats the boss of a level. Picking it up restores his weariness and allow the level to properly end, triggering the Hearts and time remaining bonus counters to start.

While the same Magic Crystal from the first game wasn't present in Simon's Quest, some variants of it did. On his travels, Simon has to get his hands on three magic crystals: the White Crystal, the Blue Crystal and the Red Crystal.

However, maybe the ones which are more related to the original Magic Crystal are those found inside of the five mansions. Each one of these crystals is hidden in the innermost chambers of a mansion and holds inside one of the five body parts of Count Dracula, which Simon has to collect and destroy to put an end to the curse set upon the land. These crystals lie on top of a pedestal in what would appear to be some sort of boss room, hinting that the player has succeeded in traversing the mansion's traps and obstacles. However, a crystal's contents can't be collected just by making contact with it. Simon has to find a merchant hidden somewhere inside the mansion first and buy an Oak Stake, with which he can then strike on the crystal to break it open and collect the remains of Dracula stored inside.

A magic crystal shows up whenever the player clears a stage. However, the crystals in this game will rise toward the sky, instead of materializing in mid-air and then falling to the ground for the player to collect, like in other games.

A Magic Crystal will show up whenever the player defeats the area boss at the end of a stage. However, it should be noted that in some stages Simon will have to fight against some mini-bosses which won't leave a Magic Crystal for the player to collect. For example, Medusa appears at the end of the swamp section of the Transylvanian Wilds. She doesn't leave a Magic Crystal to be collected after the battle and the aqueduct section continues immediately after facing her. This whole stage doesn't have a proper area boss at the end, making Medusa the only major enemy confronted in it and also making this stage the only one where a Magic Crystal doesn't appear at all.

A magic crystal shows up whenever the player clears a stage. If Juste jumps and attacks with his whip, catching the magic crystal at the same time, a message will appear on the screen. If his timing was almost perfect and he caught the crystal near top height, where it materialized, the message will read: "Excellent!!!". However, if he caught it a little off-time on its way down, the message will read: "Cool!!". If Juste only jumps and gets the magic crystal near top height without performing a whiplash, the message: "Good!" will appear instead. There doesn't seem to be any benefit for achieving this other than for amusement, though.

Instead of a magic crystal, the game introduced the Orb System, which allows an orb combined with a sub-weapon to create an advanced attack. An orb can be acquired after clearing a stage, except for the White and Black Orbs, which are hidden within specific stages.

Magic crystals retain their usual function of refilling the player's HP and Hearts in this game, and are obtained after defeating a boss.

Similar to Aria of Sorrow, Magic Crystals refill Soma Cruz's HP and Heart meters, but have a new design.

Even though there are no magic crystals in the game, a small circular area filled with holy light will appear after defeating each boss. The player can enter this circle to cure their wounds.

The Magic Jewels in Rondo of Blood and its PSP remake that appear after defeating a boss will replenish Richter or Maria's health and increases the points earned. Also take note that successfully defeating a boss and collecting the Magic Jewel item will unlock a demo for that boss and a silhouette of it will also appear on the Stage Select screen.

The player may choose to dismiss picking up Magic Jewels in their aim to score a better time in the Boss Rush Mode, as otherwise they would have to wait for the item to fully materialize and drop, wasting precious time in case they don't really need the extra health. 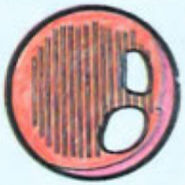 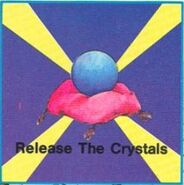 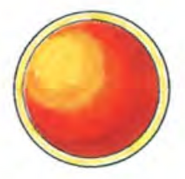 Magic Crystal from Harmony of Dissonance.

Magic Crystal from Aria of Sorrow.

Magic Crystal from Dawn of Sorrow.

Magic Crystal from Portrait of Ruin.

Magic Crystal from Order of Ecclesia.