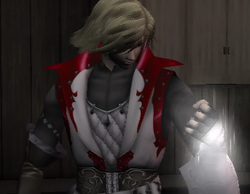 Leon Belmont's gauntlet which was enchanted by Rinaldo Gandolfi so that it enabled him to gather the magical energy released when he blocked attacks from monsters. He could then use this magic to use magical artifacts that were lying around the castle.

In Circle of the Moon, it increases Intelligence by 10.

This item was later lost to the Belmonts but at some point came into the possession of The Order, which was instrumental in several of Dracula's resurrections. It was in the possession of the dark alchemist Rohan Krause in the 17th century. Giovanni, a descendant of Rinaldo, told the Belmont sisters Zoe and Dolores of its existence and they were able to retrieve it while scouting the Order's grounds and they gave it to their brother Desmond, who was then able to use alchemy spells.

Retrieved from "https://castlevania.fandom.com/wiki/Magic_Gauntlet?oldid=198748"
Community content is available under CC-BY-SA unless otherwise noted.