Magic Seals are a gameplay mechanic in Castlevania: Dawn of Sorrow. It involves the player using the touchscreen of the Nintendo DS to draw a symbol and with it defeat most of the game's bosses.

Magic Seals are used by Soma Cruz to open doors throughout With Light's headquarters, and are also needed to permanently defeat most bosses by sending them back to their realm. Each time a boss's HP has been depleted, the game will pause for a moment and the required symbol will briefly appear on the screen, followed by an area depicting the seal's acute points along its circular border where the player can draw it by using the Nintendo DS touchscreen.

Magic seals are automatically used on doors, but if Soma fails to properly draw one while fighting a boss, then it will regain some HP and continue fighting. The player will then have to deplete its health once again to get another opportunity to draw the seal. Since human bosses (Dmitrii Blinov and Dario Bossi) belong to this world, it is not required (nor logically possible) to draw a seal in order to defeat them.

When entering a room where a boss encounter will take place, the seal that will be required to draw in order to defeat it will appear on the screen as the player opens the door, acting as a sort of tutorial where the seal will be slowly drawn to remind the player the proper way to do it.

In addition, the PAUSE menu counts with an option called "Magic Seal", where the player can learn and practice the proper way of drawing each symbol they have collected so far.

The first magic seal the player obtains in the game. It has two parts, forming the shape of a "V", and is used to seal the Flying Armor and Balore. Yoko gives it to Soma near the beginning of the game and trains him in its performance and usage.

It is obtained in the Lost Village as a present from Yoko for escorting her to safety through the level.

The second seal the player obtains in the game. It has one more line compared to Magic Seal 1, making a total of three parts. It is used to open the door to Dmitrii and Dario, and is also used to seal Malphas.

It can be found in the Garden of Madness, guarded by the first Treant.

The third seal the player obtains in the game. It has five parts, somewhat resembling a diamond with its lower left line gone. It is used to seal the Puppet Master, Gergoth and Rahab.

It can be found in the Demon Guest House, inside the upper left room below the Puppet Master's boss room.

The fourth seal the player obtains in the game. It has seven parts in total, taking the shape of an hourglass of sorts. It is used to seal Zephyr, Bat Company, Paranoia, Dario (although in Dario's case, it is automatically drawn) and Aguni.

It can be found in the Cursed Clock Tower.

The final seal the player obtains in the game. It has ten parts, forming an hexagon with two lines tracing a cross inside (although a circle can be drawn instead of the hexagon if the player follows the right sequence). It is used to seal Death and Abaddon, as well as opening a door in the Garden of Madness where an important cutscene takes place (and potentially the bad ending too).

It can be found in the Pinnacle after defeating Aguni.

Each Magic Seal has a special symbol which appears once completed. 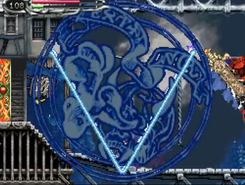 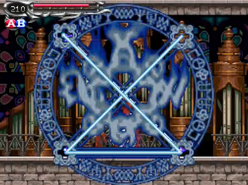 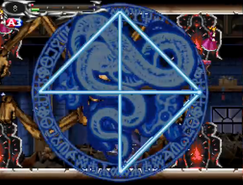 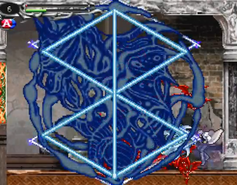 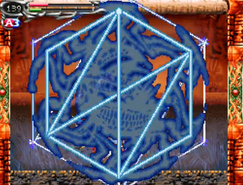 Magic Seal 5
Add a photo to this gallery

Retrieved from "https://castlevania.fandom.com/wiki/Magic_Seal?oldid=254597"
Community content is available under CC-BY-SA unless otherwise noted.