For the Lords of Shadow boss, see Crow Witch Malphas.

Malphas, also known as Karasuman or Feather Demon, is an enemy in the Castlevania series. He is a black demon with gold adornments that is accompanied by crows.

Malphas is described in the Ars Goetia as a mighty "Great Prince of Hell", commanding forty legions of demons and being second in command under Satan. He appears as a raven, but if requested, will instead resemble a man with a hoarse voice.

Malphas specializes in the construction of houses, high towers and strongholds, throws down the buildings of enemies, can destroy enemies' desires or thoughts (and/or make them known to the conjurer) and all what they have done, bestows good familiars, and can bring quickly artificers together from all places of the world.

Malphas accepts willingly and kindly any sacrifice offered to him, but then he will allegedly attempt to deceive his conjurer, so he must be treated carefully.

The Castlevania character may also be partially based on the Japanese legendary creatures known as the karasu-tengu (crow tengu). Tengu were in some parts revered as Shinto gods, other times depicted as demons or simply as supernatural beings traditionally portrayed with both human and avian characteristics. The earliest tengu were pictured with beaks –similar to Malphas bird's skull-shaped mask from the games–, but this feature has often been humanized as an unnaturally long nose.

Malphas is a crow demon inspired by both Christian and Japanese mythology. He was introduced into the series as a boss in Castlevania: Symphony of the Night, and has since appeared in following titles either as a powerful, yet lesser enemy, or retaking his place as a boss.

He tends to flap his wings and ascend in the air, gathering energy as he does so. He then releases an attack which can consist of razor-sharp feathers, a barrage of crows, or dark energy emitted from his body.

Malphas was introduced into the series in this game under the name of Karasuman ("crow man") in the American version, likely to avoid religious controversy (note that Biphron, Ukoback and Legion also had different names, although Beelzebub remained unchanged). He is the boss of the Clock Tower and fights in the same room where Richter Belmont faced Shaft Ghost in Castlevania: Rondo of Blood. Several Malphases appear as regular enemies later in Death Wing's Lair.

Malphas fights in three ways. After unfolding his wings on the ground, he will draw the essences of many demon crows inside him and unleash them in a massive wave. His second attack consists in taking flight and releasing a multitude of razor-sharp feathers in a spreading manner. Malphas can also fire energy spheres, although this attack is not seen as often. However, he is slow to attack and easy to knock off balance.

In Harmony of Dissonance, there is a remarkably similar enemy called the Feather Demon. It does not use Malphas's raven attack, but is obviously the same type of creature, only redone for the sake of the Game Boy Advance's system limitations.

While not physically appearing in the game, Malphas is referenced in Aria of Sorrow in the form of an ability soul contained within a Soul-Keeper found after defeating the Great Armor in the Study, granting Soma Cruz the Double Jump ability.

Malphas makes a proper return as a boss in Dawn of Sorrow in the Dark Chapel, where he guards the Double Jump ability (a nod to Aria of Sorrow).

Malphas is the only boss aside from Menace that does not appear in Boss Rush Mode.

Several Malphases appear as ordinary enemies in the later areas of Portrait of Ruin. As usual, they are initially found standing on the ground and won't attack until approached. A quick cast of 1,000 Blades while in this state is enough to put them out of commission without even giving them a chance to fight back.

The Crow Witch Malphas appears in Lords of Shadow as a boss with a backstory.

Malphas appears in the second season in the episode "The River", as one of the monsters that attack the Belmont Treasure Hold. Malphas gives a challenging fight to Trevor before he stabs the creature though the skull with a sharpened stick.

This depiction of Malphas appears to be based on Crow Witch Malphas from Castlevania: Lords of Shadow.

Karasuman enemy list entry from The Dracula X Chronicles version of Symphony of the Night.

Karasuman sharp feathers attack from Symphony of the Night.

Karasuman flocks of crows attack from Symphony of the Night.

Karasuman electrical spheres attack from Symphony of the Night.

Malphas from Dawn of Sorrow.

Malphas in the Castlevania animated series. 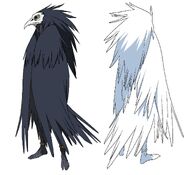