The Man Beast[1] (internally called simply Stage 2 Boss) is the boss of Stage 2 in Castlevania: The Adventure ReBirth.

A monstrous man with the ability to transform between two different forms: a large hulkish form and a thinner but more agile form.

In this form, the beast can cling to the ceiling, rip out a fragment from it and throw it at the player. He can also ram his fist into the ground, causing massive damage and making three rocks to fall from the ceiling, which he can pick up and throw as well.

Sometimes, the creature will transform into a thinner form. While in this form, he is more agile and hops around delivering flying kicks. He can also execute a whirlwind-like spinning attack. This can be temporarily repelled by striking the monster with the whip. 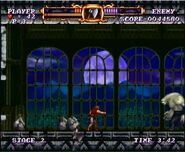 Retrieved from "https://castlevania.fandom.com/wiki/Man_Beast?oldid=261093"
Community content is available under CC-BY-SA unless otherwise noted.