Circle of the Moon (DSS card)

Aria of Sorrow
Dawn of Sorrow

The Manticore is an enemy in the Castlevania series. It is a monster with the body of a lion, the wings of a bat, and a scorpion's tail.

The manticore is a Persian legendary creature similar to the Egyptian sphinx. It has the body of a red lion, a human head with three rows of sharp teeth, sometimes bat-like wings, and a trumpet-like voice. It may be horned, winged, or both. The tail is that of either a dragon or a scorpion, and it may shoot venomous spines to either paralyze or kill its victims. It devours its preys whole and leaves no clothes, bones or possessions behind.

In Persian myth it was called "man-eater" (from early Middle Persian مارتیا martya "man" (as in human) and خوار xwar- "to eat"). The English term "manticore" was borrowed from Latin mantichora, itself derived from the Greek rendering of the Persian name, μαρτιχώρα, martichora. It passed into European folklore first through a remark by Ctesias, a Greek physician.

Pliny the Elder followed Aristotle's natural history by including the martichoras (mistranscribed as manticorus in his copy, and thus passing into European languages) among his descriptions of animals in his Naturalis Historia. Pliny's book was widely enjoyed and uncritically believed through the European Middle Ages, during which the manticore was sometimes described or illustrated in bestiaries. Through false etymology, it was sometimes assumed that the name was an amalgamation of man and tiger.

The Manticore is a large lion-like creature with a pair of bat wings affixed to its back, and a poisonous scorpion's tail. It has two forms of attack:

The Manticore also appears as the Poison-element Attribute Card in Castlevania: Circle of the Moon.

The Manticore appears in Circle of the Moon as the Poison-attribute DSS card, thus producing poison effects, such as summoning a poison cloud. When the Uranus card is obtained, Nathan can summon the Manticore, which produces a poison rain that damages all enemies on-screen.

The Manticore is encountered in Aria of Sorrow as the boss of the Chapel, and later as a common enemy in the Floating Garden. It is considered to be a hard to obtain soul, as the room where it is found must be entered from the right side in order to farm it, as the left exit connects to a different area of the maze-like layout of the Floating Garden.

It has two attacks, both of which deal a decent amount of damage if the player is not careful:

Defeating it as a boss has a small chance to yield its soul, but it can also be obtained later in the Floating Garden. Like the Devil and Curly guardian souls, it transforms Soma into a rushing ogre. It can be used to bypass the waterfall in the Underground Reservoir and gain access to the Forbidden Area.

It's possible for Soma to skip this boss in New Game+. Go to the first room of the Chapel and go upstairs. Go to the top left of the room, under the Axe Armor, and activate a Rush Form soul while facing right. Fall down to the second platform and jump to the left. Soma will be warped to the Study without facing the Manticore. By using this method, Soma can fight Julius after only two boss fights (Creaking Skull and Great Armor).

Interestingly, the Manticore does not keep the same room when faced in Boss Rush Mode. Instead of using the room in the Chapel area, he uses the Colosseum-like room from the Arena as its lair, making it a somewhat more difficult boss fight.

Manticores are encountered in the Wizardry Lab. They will attempt to sting Soma and spew fireballs at him. Its soul lets Soma grow a scorpion-like tail which attacks in tandem with his current weapon. Even though the Manticore inflicts Poison status with its stinger and the Mushussu petrifies enemies the same way, the Stinger ability obtained from the Manticore's soul will only deal physical damage, and it is the Mushussu's soul the one that grants the Poison Stinger ability.

Getting its soul will also allow Soma to combine it with a Battle Axe and create the Bhuj (ATK +90), which is one of the most powerful weapons he can get at that point in the game. A pair of Manticores appear in a room just left of the Wizardry Lab's Warp Room, which helps in their farming. The Battle Axe can be bought from Hammer's shop for $7,800, but a more economic way to create it is by buying an Axe for only $800 (or get it for free if an Axe Armor dropped one), and combining it with an Axe Armor's soul to craft it. 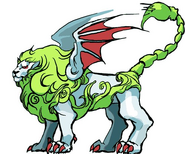