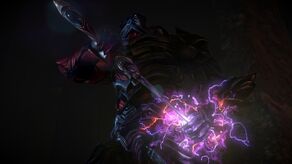 The Lieutenant wields the sword when he confronts Alucard in the chapel at the end of the Revelations DLC. He uses the sword with great skill but is ultimately defeated by Alucard, who claims his armor and the sword for himself. Alucard first uses the blade to save his father from one of Satan's Soldiers, cutting the monster in half with a single blow.

Alucard would wield the blade during his tenure disguised as the Lieutenant, using it as he fought by his father's side at various points. The blade is last seen in Alucard's use when fighting by his father on top of the Leviathan or when climbing the beast at certain points. It is unknown if the greatsword that Satan uses while possessing Alucard has any relation to the Masamune, which is the last weapon that Alucard wields prior to possession. One should note that since Satan is unable to access any of Alucard's abilities while possessing the vampire, it is doubtful that the fallen angel was able to access the Masamune, which was stored in Alucard's personal pocket dimension along with the Crissaegrim.

The sword is said to have been forged from the same metal extracted from the Abyss used to create the Lieutenant's own armor, and the blade's description says that it can go beyond the material realm.

These powers are demonstrated as the sword seems to allow the Lieutenant to cut through dimensions, allowing him to teleport and perform an unblockable slashing attack, channel the energy into a portal by jamming his sword into the ground, with the portal following his opponent before it launches several energy slashes upward, impaling his enemy. He can throw energy waves and use the sword to create duplicates of himself along with an expanding unblockable shield of energy.

A second attack involving impaling the sword into the ground causes a massive glowing yellow sigil to appear on the great that burns whoever touches it, greatly harming them. It should be noted only the Lieutenant demonstrates these powers with the sword, as Alucard is never seen using these attacks, or using anything other than the sword's regular slashes for that matter.

Like the Crissaegrim, the sword may stored away in its pocket dimension and summoned at a moment's notice.

Retrieved from "https://castlevania.fandom.com/wiki/Masamune_(Lords_of_Shadow)?oldid=287756"
Community content is available under CC-BY-SA unless otherwise noted.