"Oh, but Young Master, I could never betray the good Count..."
— Master Librarian to Alucard

The Master Librarian (図書館の主, Toshokan no Aruji?) is a character in Castlevania: Symphony of the Night and Castlevania Puzzle: Encore of the Night. He is the keeper of the library in Dracula's Castle and serves both its owner, Count Dracula, as well as his son, Alucard.

He mainly acts as a merchant and will sell powerful weapons, items and spells, as well as buy valuable jewels.

The Master Librarian is one of Alucard's allies in his quest to find the reason for the castle's resurrection and his own awakening. For a price, he will supply him with weaponry, accessories, maps, and other useful articles. Even though he seems to fear Dracula, he's not entirely loyal to him. Perhaps since Dracula is not yet awake, he has fewer consequences to consider and is thus more willing to aid the Count's estranged son.

He is the keeper of the Long Library in Dracula's castle. He has accumulated wealth of knowledge over the centuries and some special items as well, which he will part with... for a price.

The items that the Librarian will sell depend on the version and overall progress made in the game. The original North American PSX (PSX NA) version and later ports based on it include many items not available in the Japanese versions or the version found in The Dracula X Chronicles.

The most expensive item in any version is the Duplicator, which allows the player to use any item or weapon as many times as desired without decreasing the number held. It is only available after beating the game and getting the good ending, and costs 500,000 G.

The Master Librarian will not buy regular items, but will buy valuable jewels from Alucard. These are as follows:

In addition to giving the statistics of an enemy, the player can purchase tactics videos on how to defeat bosses (much like this was possible via the main menu in Castlevania: Rondo of Blood). If a tactic has already been purchased, its price will become 0 gold on following watches. 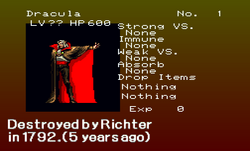 The Librarian is more than just a merchant. He has access to information that aids Alucard. An "Enemy List" gives the statistics for all the enemies in the game, including how much hit points they have, the amount of experience slaying them yields, types of attacks they are strong, weak, immune, or absorb, and what they drop (if the player has already earned that item from them).

Later games would incorporate this enemy information into a bestiary available in the normal pause menu, sometimes after a specific relic is found, so that they can access this information at any time.

In the North American PSX version of the game, beating the game with 190% map completion will unlock Sound Test mode in the Librarian's menu. All songs from the game can be listened to here.

In the original Japanese version, instead of a Sound Test mode, a special menu is available where the player can listen to the game's voice actors free talking.

Alucard can use the Gravity Boots to lift the Librarian's chair up from the room beneath where he's sitting. For doing this once, he will drop a Life Vessel. After this, the player must repeatedly perform high jumps in order to lift the chair without hitting the Librarian against the ceiling, with the Axe Lord Armor and a Ring of Arcana being the rewards. The Dracula Tunic is also available, but will not drop until Alucard has visited the Reverse Castle at least once. The order in which the items are obtained is random, as is the chance of getting any item at all. To greatly improve these chances, the player should knock his chair up without touching the ground or making him hit the ceiling.

While surprised and perhaps a little confused as to what has happened, the librarian will not hold this against Alucard and will go on with business as usual.

The Master Librarian wants nothing to do with Richter or Maria, and will only help young Master Alucard due to his past relations to him. If the player encounters him with either of these characters, he will turn his back and offer none of his services. However, Hearts can still be stolen from underneath him.

Castlevania Puzzle: Encore of the NightEdit

The Librarian acts as Alucard's tutor for how to play Story Mode in Castlevania Puzzle: Encore of the Night. He can also be unlocked in Arcade Mode as a playable character by earning the Veteran Explorer Honor.

The Librarian's shop is available in any Save Room, with a variety of items available for purchase. Additional items are available for sale as progress is made in the game. The Librarian will buy back most items for somewhat less than their purchasing price. Jewels in this games (which increase different affinities) can only be purchased from him.

The Jewel of Open can be obtained for free by retrieving it from the Librarian's main room in the Long Library.

Retrieved from "https://castlevania.fandom.com/wiki/Master_Librarian?oldid=281965"
Community content is available under CC-BY-SA unless otherwise noted.