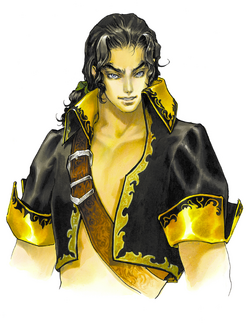 Maxim Mode is the first alternate mode in Castlevania: Harmony of Dissonance. The player controls Maxim Kischine in this mode.

Maxim Mode becomes available after beating the game as Juste with any ending, and then entering "MAXIM" as the name in the Name entry screen of a new save slot.

Maxim's standard attack is a quick forward stab with his Stellar Sword. His down attack is a kick with his foot, and he has one sub-weapon that he starts with, the Throwing Star Boomerang, which is thrown in a loop in front of him.

All areas are available at the start of the game except for the final area, which only becomes accessible after defeating all bosses in the game. The menu is unavailable and pressing START will simply pause the game. Because of this, Maxim cannot equip or use any items, and the player cannot observe his level or experience points.

Maxim does not have the high jump ability, but instead can triple jump (as opposed to Juste's double jump) and use a somersault attack by pressing ↑ + JUMP in midair, where he twirls through the air to gain height. This attack costs MP.

Maxim has two unique attacks that require advanced inputs. First is the "Maxim Mirage", which is activated by pressing →, ←, ↓ + ATTACK. It summons multiple illusions of himself to damage all enemies on the screen at the cost of MP. He can also heal all his HP by pressing ↑, ↓, ↘, → + ATTACK, costing 50 Hearts per use.

Heal
Add a photo to this gallery
Retrieved from "https://castlevania.fandom.com/wiki/Maxim_Mode?oldid=285859"
Community content is available under CC-BY-SA unless otherwise noted.