Medusa is the powerful snake woman that has appeared in nearly every Castlevania game to date. She was supposedly going to make an appearance in the cancelled "Castlevania: Resurrection".

Medusa is a woman with snakes instead of hair, also portraited having a snake tail instead of legs, that has the power to transform its victims into stone. In early games she was a big flying Medusa Head. Besides the boss, several floating Medusa Heads appear as normal enemies in most games.

Castlevania
This Medusa, called Queen Medusa in the American manual, is a big flying Medusa head that drops snakes in the floor. She gives 3000 points after being defeated.

Vampire Killer
Medusa, called Queen Medusa in western manuals and Mommy Medusa in the Japanese manual (mispelled as Mammy Medusa), is similar to her form in the original Castlevania game. The player receives 2000 points for her defeat.

In this game, Medusa wields a sword and a shield.

In Castlevania: Lament of Innocence, Medusa has a number of attacks at her command: She can command the snakes on either side to lunge forward as a sort-of snake punch; she can also do this with both sides in succession for a one-two punch. She can rise into the air and spill a trail of her poisonous blood to keep you away. She can also rise into the air to drop a plethora of smaller snakes onto the ground to overwhelm you. She can, of course, project beams ("Turn to stone!") from her eyes that can temporarily turn you to stone; if successful, she'll roll herself into a giant ball and rebound around the room, a random number of times, to damage you heavily. Finally, when her energy is low, she'll command large stones ("Damn you!") to surround herself before firing them toward you one after another. There are two differences in "Crazy Mode": She'll do the snake punch in seven-step combos, and she'll do a stone gaze as part of the stone-throwing attack. 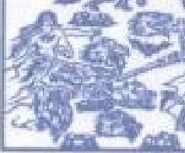 Medusa from the LCD Symphony of the Night

Retrieved from "https://castlevania.fandom.com/wiki/Medusa?oldid=35114"
Community content is available under CC-BY-SA unless otherwise noted.