The Merman and Fish Man are recurrent enemies in the Castlevania series. They are aquatic monsters that live close to the shore and hunt prey near the water. 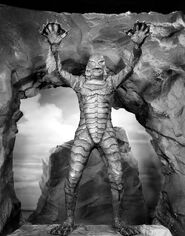 Based on the Gill-man, the main antagonist from the 1954 Universal horror film Creature from the Black Lagoon (and its sequels).

The last known surviving member of a race of amphibious humanoids which flourished during the Devonian age, the Gill-man dwelled all this time in a lagoon located in a largely unexplored area of the Amazon rainforest. It possesses large, webbed hands with sharp claws on the tip of each finger. Its scaly skin is extremely tough, which combined with a fast-acting healing factor, allows it to survive wounds which would be fatal to humans, such as gunshots and full immolation. It also possesses superhuman strength.

Mermen have been a thorn in the side of heroes whenever water is involved in their adventures. Mermen like to jump up from the water and begin to march toward the protagonist. After a while, they will stop and spew a fireball in the player's direction from their gaping mouths. After a while, they will normally hop back into the water or sometimes continue marching around looking for enemies to attack.

Mermen are closely related to the Fish Men (who are also sometimes called "Mermen" as well) but have more fish-like characteristics. However, Fish Men act similarly, if not exactly the same, to Mermen. In some situations, their names and/or likenesses are interchangeable. In some games, Fish Men are distinguished from Mermen with a lack of arms.

In all 3D and some 2D Castlevania games, Mermen also like to roll up into a ball with their sharp, pointy fins outstretched, and dash toward the player for extra damage.

In Castlevania Judgment, Mermen can be fought as random encounters or event rooms in Castle Mode. Mermen close in to the player by jumping. Their attack pattern is as follows:

When fighting Mermen, the stage spawns either: two Mermen, or Zombies and Mermen (usually being two Zombies and one Merman, but there are also times that a quartet of two Zombies and two Mermen spawn). The jump-slash attack of the monster can also harm its allies.

Mermen also like to use their clawed, webbed hands and slash at players as well, so it is wise that adventurers keep a good distance between them and the Mermen, but not enough so that the player can't attack them.

Lastly, Mermen are almost always found near water. Wherever there is water, Mermen are usually near. It is best for adventurers to be careful, as Mermen have a nasty habit of occupying platforms over water and sending a careless hero into a watery grave.

Note: Any game where a Fish Man appears and is known as, or acts, as a Merman, is also credited as a "Merman" appearance.

The typical Merman is red and spews a fireball from its mouth on occasion. Sometimes the fireballs are replaced with water or other projectiles, but that is usually done by creatures that are variations of the common Merman. Some variations include:

...and in one occasion, a Merman even appeared as a boss:

The Fish Man in Simon's Quest pops out from the water and spews fireballs at the player, either straight ahead or diagonally. They are generally encountered while crossing a long bridge over a body of water or while being transported by the Ferryman over a lake.

The Monster Fish appears in front of the player and spews fireballs. Takes one hit to destroy and is worth 5 points.

The Monster Fish is the only monster that can be found both in day (take two hits to destroy) or night (take four hits) and is present in all stages. They rise up in front of the player and spews fireballs. They block the player's path and cannot be jumped over. Being rather short creatures, these can only be damaged with low attacks. They are worth 20 points.

Nintendo Power calls this creature "Water Creep" and describes it as amphibian.

Guarding the classic moat found in the Ruins of the Castle Dracula, the Mermen here look more draconian than their past gill-man-inspired versions. They are also able to spew long water jets toward the player instead of fireballs.

Early prototype versions of this game show a completely different sprite for this enemy that much closely resembles their past design (see the Gallery).

This game features three variants of this enemy: the Merman, the Fish Man, and a Giant Merman boss. The only difference between Mermen and Fish Men in this game is their appearance.

There are two types of Mermen in this game. The first are the red colored ones from Dawn of Sorrow and Portrait of Ruin, and they appear in the Kalidus Channel. The second type are the yellow colored ones from Aria of Sorrow, Symphony of the Night and Harmony of Dissonance, and they appear in Somnus Reef. While they both jump out of the water to attack, the red ones use magical based attacks by spewing fireballs, and the yellow ones use physical-based attacks by diving into the player.

Mermen appear in this game as normal enemies. All must be defeated to summon the Iron Gladiator.

Retrieved from "https://castlevania.fandom.com/wiki/Merman?oldid=281540"
Community content is available under CC-BY-SA unless otherwise noted.