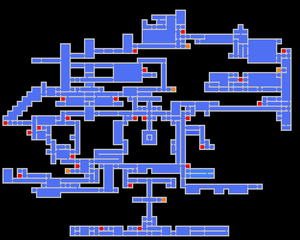 The term is sometimes broadened to refer to any of former series producer Koji Igarashi's games, including 3D games such as Castlevania: Lament of Innocence and Castlevania: Curse of Darkness.[1]

Igavania gets its name from Koji Igarashi, one of the lead designers for Castlevania: Symphony of the Night and producer of several other Castlevania games. On the main page of his kickstarter campaign for Bloodstained: Ritual of the Night, he gives the definition as being "A Gothic, exploration-focused action platformer, designed by one of the godfathers of the genre!"[2]

While Igavania has been used to describe this type of game as early as 2005,[3] the term "metroidvania" is much more widely used among fans and press. It is a portmanteau of two video game series titles: Konami's Castlevania (itself a portmanteau) and Nintendo's Metroid. The word was coined to reflect the incorporation of gameplay elements (particularly exploration-based gameplay) from Super Metroid into 1997's Castlevania: Symphony of the Night, and is used primarily by the gaming press and people familiar with the Castlevania franchise.

While Igavania generally refers specifically to games produced or worked on by Koji Igarashi, metroidvania is frequently associated with any game that follows a similar style to Metroid and Igavania games, regardless of whether or not they are Castlevania or Metroid games.

Although the press admitted that Castlevania: Symphony of the Night was "laid out in a very similar configuration" to Super Metroid, it was not criticized for incorporating elements from Nintendo's game.[4] In fact, the reaction was quite the opposite; the decision was praised for breathing new life into the series; "It's impressive how Konami has combined the best aspects of Nintendo's Super Metroid with their own expert character design and knack for drama."[5]

Subsequent metroidvanias have fared well critically,[6] although the question of if they will live up to or surpass Symphony of the Night often plagues discourses on the games.[7]

Distinct features associated with the metroidvania formula are non-linear, exploration-based gameplay, power-ups and role-playing elements. Typical gameplay involves exploring the game-world and discovering areas that cannot be accessed at the current time. Finding an item (either a key or a special ability) usually grants access to the new section of the game. Some upgrade items are needed to obtain others, lending a sense of structure, sequence and linearity to the game. This structure is often vital in creating a coherent plot by ensuring that events that progress the storyline are triggered in the proper order.

Despite this implicit structure, industrious players often pride themselves on sequence breaking these games. One example is traversing the Underground Waterway in Castlevania: Circle of the Moon before receiving the Cleansing magic item, which purifies the poisoned water that fills the level. The poisoned water damages the hero, Nathan Graves. This obstacle was intended to prevent players from prematurely progressing to an event in which Camilla (the level's boss) reveals storyline information and subsequently obtaining the Roc Wing (an item that allows access to several other castle areas) with her defeat.

The original Metroid and Castlevania II: Simon's Quest blazed the trail for the metroidvanias. Both were based heavily on non-linear, side-scrolling exploration, with areas that could only be reached after attaining items in other areas. However, neither had the automatic mapping feature or any real semblance of plot that can be found in the metroidvanias that followed. Castlevania games after Simon's Quest returned to a strictly linear, or branching-path linear, structure until the arrival of Castlevania: Symphony of the Night.

Retrieved from "https://castlevania.fandom.com/wiki/Metroidvania?oldid=279189"
Community content is available under CC-BY-SA unless otherwise noted.