For other uses, see Mirror of Fate (disambiguation). 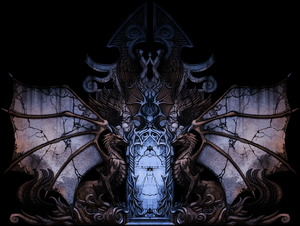 The Mirror of Fate is a magical object found in Bernhard Castle. It has a presence throughout the Lords of Shadow series, and is the titular object of the game Castlevania: Mirror of Fate.

The mirror is situated in the Bernhard Castle throne room. Its history is unknown, with no knowledge of who built it or why. It is a powerful magical instrument, capable of revealing someone's past and their true fate. It also seems to possess sentience, which manifests itself in the form of the Lost Soul, a mysterious creature whose purpose it is to guide those it encounters and steer them toward their fate. The mirror is shown to be able to transport people to places that they need to go (so far only Pan and Gabriel).

The mirror is first seen when Gabriel enters Carmilla's throne room. Its name and purpose is not mentioned or explained. Once Carmilla is defeated, Pan materializes through the mirror. Following the revelations about his mission and the true nature of the Lords of Shadow, Gabriel angrily demands an explanation from Pan. Instead of trying to calm Gabriel down, Pan points him towards the mirror, saying "only when we look inside ourselves can we truly begin to understand". Although hesitant to interact with the mirror at first, Gabriel steps through it and is teleported to Bones Forest.

A fragment of the mirror was given to an infant Trevor Belmont by Pan when he was put into hiding. Trevor would wear the mirror around his neck into adulthood until he went to the Bernhard Castle to defeat his vampiric father. Before his departure, he gave the fragment to his young son Simon Belmont.

Gabriel would become the ruler of the castle under the moniker Dracula, and the mirror would remain in the throne room. The mirror unveiled the truth of Trevor's identity to his father, leading a remorseful Dracula to turn him into a vampire postmortem. The mirror remained in the room after Dracula turned it into a tomb for Alucard.

The Mirror revealed the truth of his identity to Alucard and prompted him to go after his father again. Once Dracula is apparently defeated, Alucard convinces Simon to give the mirror fragment to the Lost Soul so that he won't be manipulated by it anymore. Simon, although adamant about keeping the fragment since it is a memento of his deceased parents, reluctantly agrees to do so. After Alucard retrieves the stake from the Vampire Killer from his tomb, the tower collapses, destroying the mirror in the process.

After the tower's collapse, the Toy Maker searched the remains for the mirror and found a single fragment. Agreus also took a fragment as bait for Dracula. Although hundreds of years later, Victor would also find a mirror fragment in his search of the castle.

Trevor asked that his father reassemble the mirror for him. Dracula fought and killed Agreus for his mirror piece, the Toy Maker handed over his piece over after being freed of the castle's blood, and the final piece was taken from Victor's body after his death.

Once the mirror was brought back to Trevor and reassembled, the enraged castle used Trevor to create an avatar of itself to fight the boy's father. After the giant mass of demonic blood is destroyed, Dracula is given the mirror and it helps him to open certain pathways on his journey. Finally, after the defeat of Satan, Dracula takes one final look into the mirror and destroys it, deciding to make his own fate.

Alucard near the Mirror of Fate.

Dracula with one of the Mirror fragments.

Retrieved from "https://castlevania.fandom.com/wiki/Mirror_of_Fate_(object)?oldid=290857"
Community content is available under CC-BY-SA unless otherwise noted.