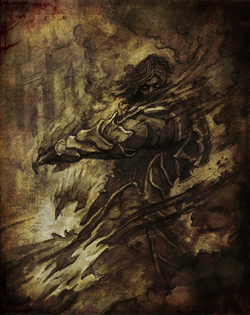 Mist Form is the ability to turn into mist, which can be done by some vampires, including Alucard, Laura and Dracula.

Laura has the ability in the Reverie expansion for Castlevania: Lords of Shadow. She uses the form to disappear and reappear to catch up to Gabriel Belmont or to reach areas before he can reach them. When she is controlled by the player, she can use the form in an unlimited fashion to evade enemy attacks, maneuver, and pass through metal grates much as Alucard.

Gabriel Belmont and Alucard's Lords of Shadow counterpart both share this ability. Using a great amount of concentration, Alucard can divide his body into millions of tiny particles which he then uses as a way of enhancing his dodge move. He also uses this to absorb enemy life force.

As Dracul, Gabriel Belmont uses his mist form quite formidably. In Mirror of Fate, he capitalizes on the ability when fighting against Simon and Alucard, and uses it to gain the upper hand against Trevor. He can seemingly affect its solidity since he can use it to both pass through obstacles and lift Trevor into the air.

After losing most of his powers to the Crissaegrim's sealing ability and the influence of Castlevania, Dracul eventually regains the ability by stealing it from the youthful form of Carmilla in the castle. This form of mist is crimson in color as opposed to the black hue of his Mirror of Fate mist. Unlike Laura's mist, which is much more mobile in comparison and has no seeming time limit, Dracul's mist only lasts for a small amount of time and is much slower in its in-game use. However, when trying to escape grabs and other such attacks, turning into mist makes its movement much faster and more mobile than is controlled in-game.

Aside from dodging attacks and traversing the environment, Dracul can use Void and Chaos magic to transform the mist form to either instantly freeze enemies (Hoarfrost Fog) or break their armor (Chaos Wave) when passing through them.

Given Dracul's previous mastery of the skill in Mirror of Fate, his ability to completely strip Carmilla of the power, and its speed and mobility outside of player control, it is possible that the time and mobility constraints are purely caused by game mechanics.

Retrieved from "https://castlevania.fandom.com/wiki/Mist_Form_(Lords_of_Shadow)?oldid=222904"
Community content is available under CC-BY-SA unless otherwise noted.