Print Stations can be used throughout the course of the game where stickers of several mascots from popular Konami franchises make a cameo, including: 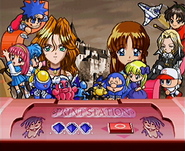 Retrieved from "https://castlevania.fandom.com/wiki/Mitsumete_Knight_R:_Daibouken-hen?oldid=279379"
Community content is available under CC-BY-SA unless otherwise noted.