The Moai is a hidden item in the Castlevania series. They are ancient stone carvings. Very valuable to those who are interested.

He has also appeared as a playable character in several Konami mascot games that include Castlevania characters in their roster, as well as making cameos in several games in the series.

Moai heads originally appeared in the Gradius series before being introduced in Castlevania, where it appears in many titles as an enemy turret.

These special items can only be obtained after playing through the game at least once. They are the most valuable of all special items the player can find in the game, being worth 4,000 points (twice as many as a Crown). To obtain them, the player has to perform a specific action (such as jumping, walking or waiting) in a particular place to make them appear.

One of the forms the Bat Company takes in Dawn of Sorrow is a giant Moai head. It spews laser rings throughout the entire room, much like they do in the Gradius series.

If a save file of Castlevania: Lament of Innocence is found in the memory card while playing Curse of Darkness, at the beginning of the game Hector can walk all the way in the opposite direction of the Abandoned Castle and reach a dead end (near where an entrance to Aiolon Ruins appears much later in the game); there he will find a Potion and a Moai head. This item can be used to restore his HP completely, or better yet, be sold at Julia's shop for $5,730 gold (the value is reminiscent to the 573 number often used by Konami).

One of the bosses in this game, Rusalka, will summon large stalactite totems from above in the shape of Moai heads, which will then get stuck into the floor. Shanoa can either destroy them or use them to protect herself from the waves of water sent by the boss. 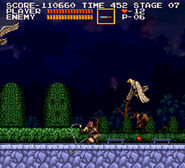 A tree pruned as a Moai in Castlevania Chronicles.

Moai from Curse of Darkness.

Bat Company assuming a Moai form in Dawn of Sorrow. 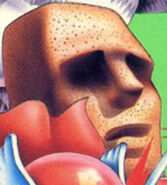 Moai from the Salamander anime series.

Moai from the Hai no Majutsushi cover artwork. 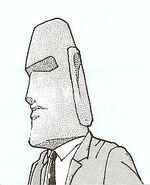 Moai from the Hai no Majutsushi instruction booklet. 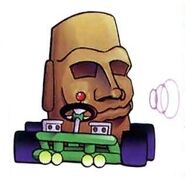 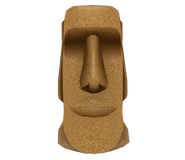 A Moai in "The Reparation of My Heart" from the animated series.
Add a photo to this gallery

Retrieved from "https://castlevania.fandom.com/wiki/Moai?oldid=320621"
Community content is available under CC-BY-SA unless otherwise noted.