One of the playable hero characters in this game is "Aluca". His initial form resembles Kid Dracula, and he can evolve into Alucard as well as Dracula.

Along its main cast, the game also features several characters from the Castlevania series and other Konami franchises, including: Simon, Grim, Getsu Fuma, Goemon and Vic Viper.

A manga adaptation was serialized in Shogakukan's CoroCoro Comic from June 2012 to February 2015. It was followed by a sequel series called Maō Da Ze! Oreca Battle from March 2015 to January 2016. An anime adaptation aired between April 7, 2014 and March 30, 2015 alongside Dragon Collection, another Konami video game adaptation.

Dimension Dragon Vic Viper
Add a photo to this gallery

Anime series promotional artwork
Add a photo to this gallery 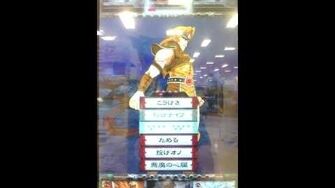 Monster Retsuden ORECA BATTLE - 01
Add a photo to this gallery

Retrieved from "https://castlevania.fandom.com/wiki/Monster_Retsuden_ORECA_BATTLE?oldid=284182"
Community content is available under CC-BY-SA unless otherwise noted.