"It was an administrative problem, and I solved it."
— Morana in "What the Night Brings"

Morana (モラーナ, Morāna?) is a character in the Castlevania animated series. She is one of the four Queens of Styria and a member of the Council of Sisters, serving as a strategist and economist.

She was voiced by Yasmine Al Massri in the English version of the show.

Morana is the oldest from the Council of Sisters and she is probably thousands of years old.[1] As a reminder of older times, she wears a kaunakes styled shawl, which could be a hint to her having Mesopotamian or Persian origin.

Morana's appearance is that of a woman of average height with darker features (with the exception of her eyes, which have a rather light blue hue), implying her to be of Middle Eastern/North African or South Asian descent. Like every other vampire in the animated series, she has pointed ears and sharp fangs. Morana has shoulder-length hair that appears to be thick and wavy. She wears an ultramarine blue and white dress, which she accompanies with a golden shawl. She also wears blue eyeshadow, golden earrings, and a ring on her right ear.

"Morana's a genius."
— Striga in "Abandon All Hope"

Morana is the chief administrator and organizer of Styria, running the kingdom while Carmilla is away. She is not afraid to share her honest advice with Carmilla. Morana is described as being highly cruel by Lenore; often using torture to get her way with enemies, or just for fun.

Being the one who keeps Styria running, Morana is in close correspondence with Carmilla. She was the first to embrace Carmilla's plan and helps to align Striga to it. Being focused on the present, Morana is Carmilla's prime agent in making her dreams a reality.

Morana works closely with Striga; the two keep the kingdom of Styria running. They have long been lovers and work exceptionally well together - combining solid plans, supporting each other, and pushing each other to greater heights. As Striga makes a military strategy, Morana supports the plans with supply lines, currency, and mercenaries. Morana is excited by the notion of building and running an empire with endless supplies of blood.

As seen during her and Striga's logistical survey of the lands that Carmilla desires to conquer, Morana is shown to be the most realistic of the four. This is seen where she quickly realized the impossibility of Carmilla's conquest and the immense administrative and logistical difficulty it would take to police and control an area that was essentially nothing more than open fields and forests where humans could easily escape, hide and regroup in for thousands of years. Morana herself has admitted that she had only thought that Carmilla's plan made sense because she had been taken in by the latter's charisma.

Like Striga and Carmilla, Morana has very little, if no, compassion or sympathy for humanity, seeing them as nothing more than food for her and other vampires, and has literally stated that she saw them no better than livestock that wears shoes and has no regret or guilt at turning them into food. However, despite her abysmal attitude towards them, Morana has acknowledged their ability, adaptability, and intelligence; this is seen where she begrudgingly admitted that humans are smarter and craftier than pigs and livestock and that they will constantly fight back against her and her sister's rule should they successfully conquer the lands from Styria to the Black Sea. Away from Carmilla, Morana was able to realize that controlling such wide lands was near impossible without near-constant, never-ending maintenance from both her and Striga to maintain control of their "Empire," effectively leaving her trapped in Styria trying to keep supply lines intact and leaving Striga constantly battling their captured humans to keep control of them for the rest of their immortal lives.

Despite her being sometimes being fed up with each of their individual personalities, Morana has shown to deeply care for her "sisters" and considers them dear friends of hers. This is seen in her relationships with Carmilla and Lenore, despite finding Carmilla's ambition and expectations of making her schemes work for her, Morana has shown to deeply care for her as her friend and despite realizing the impossibility of her conquest, Morana was shown to have been torn between her desire for freedom with Striga and her loyalty to Carmilla. After Carmilla was killed during her battle with Isaac, Moran was shown to have shed tears of grief over her death and silently mourned for her. Morana was also shown to care for Lenore in the same light despite finding her personality frustrating at times; this is seen where she had attempted to convince Striga to go back to the castle and rescue her after sensing Carmilla's death.

"So we can deplete the forces rallied against us and deploy the men we buy, as you wish."
— Morana in "What the Night Brings"

Brilliant administrator: Morana knows all aspects of how a kingdom is run. She is well educated on how effective empires were run in the past and takes inspiration while planning Styria's growth.

– Striga: Soldiers, mercenaries, local forces — what's the difference?
– Morana: The difference is that mercenaries can be rehired by the opposing side for more money!
– Striga: But... there's no honor in that.
– Morana: No, but there is money.
— ("What the Night Brings")

– Carmilla: But we do have Hector.
– Morana: We have a half dead thing in the cell that will have no interest at all in helping you do anything.
– Carmilla: He is quite pliable.
– Morana: He was quite pliable once. And then you got him to betray his master, made him see all his goals destroyed, beat the *** out of him, and dragged him eight hundred miles on the end of a rope. I don't see him being happy to do you any other favors, Carmilla.
— ("The Reparation of My Heart").

Morana and Striga "I Have a Scheme"

Vampires and sisters, we have a scheme!

Morana in her day gown.

I am a genius.

Morana and Striga in the Season 4 trailer.

Morana and Striga in the Season 4 (first look image). 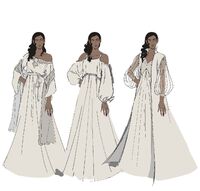 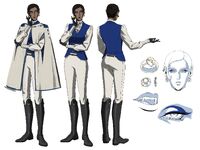 For Morana, I wanted her to look really out of time but also regal. Vampires wear more modern fashion than humans in Castlevania [Alucard invented the V-neck], so there's more room to play with clothing periods. Morana's the oldest, probably thousands of years old. Her shawl is a kaunake-type thing that she's either kept for thousands of years or adapted from something else as a reminder of older times, while her outfit top is more Elizabethan. Morana has modern makeup because she's an icon, and one of the biggest challenges was trying to do that eye makeup myself at 2 a.m. to test my abilities.[1]