Abandon All Hope
(Season 3)
Having the World

"I don't get it. We killed Dracula. And now we have to spend the rest of our lives making sure nobody brings him back from the dead? This is not what I agreed to."
— Trevor Belmont

Murder Wakes It Up is the first episode of the fourth season, and the 23rd episode overall, of Netflix's original series, Castlevania.

Belmont and Sypha continue to battle beasts loyal to Dracula, but it's getting a little old. Meanwhile, Alucard receives a guest.

Following the events of Lindenfeld, Trevor and Sypha decide to stop being adventurers and focus more heavily on demon-slaying. For six weeks they fight against demons and live Trevor's way. The first week, they face a small army of skeleton soldiers controlled by a vampire necromancer in a forest of dead trees. Then they find a group of night creatures worshipping a picture of Dracula. This escalates when they discover a group of vampires attempting to revive Dracula with a magical code that uses "murder to wake it up".

Along the way of the constant battles with evil creatures, Sypha finds that she's changed, and not for the better. Frustrated with the constant fighting and bad luck, Sypha even curses. This surprises Trevor, but Sypha claims he's the one who turned her into this. She goes on a swear word-laced tirade and blames Trevor for turning her into a foul mouth.

The week after Sypha's meltdown and battle in the wheatfield, the duo also stops a group of zealots trying to commit human sacrifices on children. Like the other groups, these evildoers were also worshipping something. This time it was a shrine to the Grim Reaper or "Death" itself, hoping it would pull Dracula out from the depths of Hell.

After six weeks of fighting, Trevor and Sypha arrive in Targoviste. They fight and kill two vampires named Sladek and Ivan. The vampires killed several people inside a secure building looking for magical tools. Sypha feels guilty that they allowed so many people to die, but Trevor believes they've been bogged down by six weeks of hardship and can't be bothered to blame himself. As they exit, Trevor expresses his frustration that the world still revolves around him even after killing Dracula.

As Trevor and Sypha walk out of the building, they are watched from above by a vampire named Varney and his partner Ratko. Sladek and Ivan were their allies. Ratko surmises that they perished against the Speaker magician and the Belmont. Varney is annoyed that his life has gone down so badly despite being an original member of Dracula's Court.

Alucard has added several corpses to the stakes outside the castle entrance during the past weeks. Lonesome again, Alucard comes out of the house much dirtier than usual. He urinates and notices a deceased rider on a horse approaching his house before going inside. The rider carries a message to "The Alucard" from the people of Danesti asking for aid. After burying the rider, Alucard looks in the mirror and notices how dirty his face has gotten. Distraught, he comments that he's turning into Trevor.

– Sypha: It decodes as Vlad Dracula Tepes.
– Trevor: Why the *** would anyone do that? Would you do that? (the captive people shake their head in response) Oh, exactly. God this is getting on my nerves. I wish I could *** kill you twice!

– Alucard: I should drink more water and less wine. This is coming out as scabs and wax.

– Alucard: (to the horse) You stay right there. I'm not done with you yet. (the horse whinnies) A bit less of your ***, please.

Layout and key art of Trevor by Sam Deats.

Layout and key art of Trevor by Sam Deats.

Layout and key art of Sypha by Sam Deats.

Layout and key art of Sypha by Sam Deats. 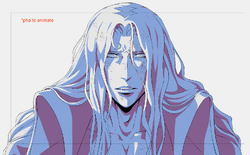 Layout and key art for Varney and Ratko by Sam Deats.
Community content is available under CC-BY-SA unless otherwise noted.
Advertisement