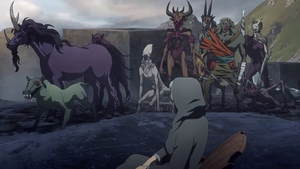 "Night creatures kill, destroy and despoil. It is our pleasure."
— Flyseyes to Isaac in "Walk Away"

A Night Creature is the product of the reanimation of a corpse through the process known as "forging", which involves the insertion of a foreign soul or a demon into the body through the employment of magic and which can only be performed by certain humans, appropriately referred to as "Forgemasters". More than simply reanimating the body, the forging process's main goal is to give it new life, which encompasses restoring it to its original form (even though sometimes partially, due to the permanent loss of some of its parts) or making it take a completely new shape. In most cases, it also means giving the resurrected being an all-new identity completely different from the body owner's former life.

The forging process, to some extent, is similar to necromancy, although the main difference strives in that the former employs the insertion of a foreign soul or a demon into the dead body. These souls, for the most part, are collected from Hell, an alternate realm where the souls of those who have been damned in life go to be punished.

Even if the goal is the same –that is, bringing a dead body back to life–, the manufacturing process is unique to each Forgemaster. In the series, the two most prominent Forgemasters are Hector and Isaac.

Hector's forging process involves a thorough and careful reconstruction of a dead body, which takes a considerably amount of time and is done in a workshop, where he employs special tools specifically intended for this end. It's worth mentioning that many (if not all) of Hector's creations appear to rise in a zombified state; as such, they often have badly damaged bodies, with some of their parts sometimes permanently missing. On the other hand, of both Forgemasters he's the only one seen to bring the dead back to life with their former bodies (although he's also able to create transmogrified ones). Once the body is ready, he employs his hammer to summon a soul and with it give it new life. It's also worth noting that not all creatures created by Hector display advanced combat abilities; in some cases, they look and behave almost identically to their former living selves, although in other cases, they're just mindless shades of their former identities. Night creatures forged by Hector are distinctive for emitting a light-blue glow from their eyes.

Isaac's forging process, on the other hand, is much quicker and efficient. He makes use of a ritualistic dagger, and all he needs to do (relatively speaking) is plunge it into a living being to almost instantly transmogrify it into a night creature (it is implied that the entire process of dying, transmogrifying, and resurrecting already with a new soul takes place in quick succession in one swift move). Isaac is only seen working with living bodies, although that doesn't mean he isn't able to work with dead ones as well; in fact, at one point, he remarks that he only can't bring back to life bodies that are already too decayed. Isaac's creations are characteristic of having a more menacing visage, being much more aggressive and powerful. Isaac's forged night creatures have a red glow emitting from their eyes.

Manufactured night creatures can take all sorts of shapes and sizes, which in most cases might appear as horrifying abominations to the human eye. They can either be beast-like, bear large fangs, clawed, winged, horned, multi-eyed, or even a combination of all of these, along with the inclusion of all sorts of other possible features. However, one thing most of these monsters have in common is that they bear a great amount of strength, speed, agility, and stamina which far surpasses those of a human, making them extremely dangerous and considerably difficult to fight against. Furthermore, many night creatures inherently and/or instinctively already know how to use certain weapons and do so with great skill, whether they are axes, lances, bows, etc.

It is also implied that when a damned soul goes to Hell, it's at that point when it adopts a new and monstrous form as part of their punishment, becoming a "demon" from then onward (an example would be Flyseyes, who was a human philosopher in life and was transformed into a fly-like monster when his soul arrived to Hell), and that these are the creatures that are brought back to the terrestrial plane by the Forgemasters, using the dead bodies provided by the latter only as vessels to contain their souls, but taking their demoniacal shape in the real world (on a related note, there is no clarification if in Hell there are also purebred demons which weren't created from human souls).

There have also been instances where demons are seen escaping from Hell directly into our world via the Infinite Corridor (such as was the case of Malachi and the Malebranche demons), without having to go through the forging process. For all intents and purposes, these are also referred to as "night creatures" in regard to the animated series. In this group would probably also be included all the demons Dracula recruited during the year following his threat to Targoviste, although it's undisclosed if by that time he had already sought the assistance of the Forgemasters and that this simply was not shown onscreen (for example, Blue Fangs is implied to have been forged by Hector, due to emitting a blue glow from his eyes, characteristic of the creatures created by this Forgemaster).

The basic nature of a night creature is to "kill, destroy and despoil", and they instinctively seek and eat blood and meat; however, this doesn't mean they cannot feed through other sources (plants, fruits, and vegetables, seeds, etc.). A remarkable example takes place at one point when Flyseyes asks Isaac why he is making his creatures to bury the dead and reconstruct a city, going against their rapacious nature, to which the latter invites him to eat a berry. Flyseyes's former life memories suddenly come back at him at the taste of the fruit, and Isaac then asks him if their penance in this world should be as eternal as their damnation, to which both don't know the answer. Isaac explains to him that as their master, they are what he wishes, and that is being more than mere tools. He wants to set the ground ready for them to do more than what they were intended for, probably hinting at them eventually living their lives following their own will.[1]

After the Vampire Lord Dracula declared war against all Humanity for the unjust execution of his wife, he realized he would need an army to carry on such mighty enterprise. He came to the conclusion that he would find the soldiers he needed in the pits of Hell itself.

At some undisclosed point, he sought the assistance of two Forgemasters named Hector and Isaac. These individuals possessed the knowledge and means necessary to bring souls back from Hell and use them to create monsters for the vampire's desired army. Due to having these abilities, Dracula held a great sense of respect toward them –even if they were humans–, conversely to the rest of his vampire army, which merely saw them as two weak and annoying additions to their ranks.

Nevertheless, the Forgemasters resulted in being key during Dracula's hostile campaign, giving him an ample edge in battle, as well as providing him with an almost infinite supply of powerful soldiers for his army, with whom he devastated the cities and towns they attacked, almost rendering the latter's defenses useless against them. For the most part, no human really stood a chance against these abominations, until Trevor Belmont, Sypha Belnades and Alucard, Dracula's own son, taught them how to fight back.

However, during their attack on Braila, Carmilla, one of Dracula's most powerful generals, carried on a treacherous attack against the Vampire Lord's own forces with the objective of taking over the war campaign for herself and her country. Unfortunately for her, this resulted in almost the extermination of both armies.

Defeated, Carmilla returned to Styria, although she brought a very important spoil of war with her: the Forgemaster Hector. After discussing their next move with her Council, they came to the conclusion that Hector could provide them with an army in the same vein as Dracula's. For this end, one of the Council's members, Lenore, offered herself to convince Hector to do this task.

On his part, during the final moments of the battle of Braila, Isaac was saved by Dracula by being thrown by the latter inside a transmission mirror. Having a strengthened sense of loyalty toward his former leader and savior, as well as out of gratitude, Isaac decided to continue Dracula's campaign by himself. As such, he also sought the extermination of all humankind to cleanse the world from their conflicting presence. He then started a long journey toward Styria to vanquish the betrayer Carmilla; doing so by recruiting the bodies of all those living in the cities and towns he crossed in his path in order to build a new army.

Isaac's campaign proved to be successful. He managed to arrive at Styria with a huge army of night creatures loyal to him and ultimately defeated the Vampire Queen with their aid. Nevertheless, during his journey, he went through many tribulations, and in the end, he concluded that humankind deserved its place in the world. After his final victory over the vampire army, Isaac became the new King of Styria from that day onward.

Isaac accompanied by his army of Night Creatures during the final battle against Carmilla. 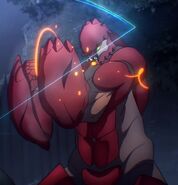 A night creature similar to the ninki nanka. 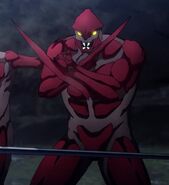