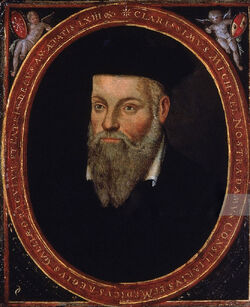 Michel de Nostredame, usually Latinised as Nostradamus, was a famous seer (b. 1503 d. 1566) who prophesied about Dracula's return in 1999. Dracula rose as predicted, but was destroyed completely when the vampire hunters sealed his castle in a total eclipse, thus ending his cycle of regeneration. He also predicted that in the year 2035, a new master would come to the castle and inherit all of Dracula's powers. This too came to pass, as Soma Cruz, who had Dracula's soul, came to the castle and gained all of Dracula's abilities.

Nostradamus lived in a time after Dracula's defeat by Trevor and his allies, but before his resurrection and subsequent battle with Christopher Belmont. It is possible that he foresaw all of Dracula's resurrections, but the only one mentioned in the game is the one in 1999.

Nostradamus's prophecy was well known in the 19th and 20th Centuries, as the forces of good prepared for Dracula's great return in 1999. For unknown reasons, the Belmont Clan was barred from wielding the Vampire Killer whip again until that fateful day and left it with the Morris Clan for safe keeping.

After Dracula's ultimate defeat in 1999, those born at the moment of his death inherited some of his powers and became candidates for the next Dark Lord. One of these men, Graham Jones, started a cult and believed that he was the man Nostradamus had predicted to become the new master of Dracula's castle. Graham had indeed inherited some of Dracula's powers and when he learned of Soma's gift of dominance, he made his way to the throne room as fast as he could to claim the castle as his own. Soma, however, defeated Graham and gained the castle's powers. He was able to prevent himself from becoming the next Dark Lord, though, by battling Chaos and freeing himself from his destiny.

Retrieved from "https://castlevania.fandom.com/wiki/Nostradamus?oldid=276675"
Community content is available under CC-BY-SA unless otherwise noted.