Eight-armed sea creatures. The first octopus enemy to appear in a Castlevania game was an alien octopus encapsulated in a soap bubble in a sea level in Boku Dracula-kun. It did little more than bounce around the edges of the area.

In Castlevania: Symphony of the Night, Alucard faces a hoard of mutant Dark Octopuses which can live out of the water and fill the area with deadly black oil. This Dark Octopus would return in Castlevania: Order of Ecclesia.

Electrical octopus-like Abiondargs appeared in Circle of the Moon and moved in large numbers around the perimeter of a platform, much like Fuzz Busters in previous games (although they could be killed by normal means). 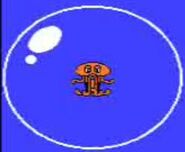 Dark Octopus from Symphony of the Night

Dark Octopus from Castlevania: Order of Ecclesia
Add a photo to this gallery
Retrieved from "https://castlevania.fandom.com/wiki/Octopuses?oldid=259917"
Community content is available under CC-BY-SA unless otherwise noted.