For the general variant of this enemy, see Axe Armor.

Symphony of the Night[1]

Portrait of Ruin[1]
Harmony of Despair[1]

The Old Axe Armor can be either an enemy or a complete suit of armor the player can wear (sometimes both), depending on the game it is found. If it's found in armor form, wearing it will allow the player to play through the game in Old Axe Armor Mode, where they'll control a character styled after the Axe Armor that first appeared in Castlevania: Rondo of Blood.

Whoever wears this item "becomes" an Axe Armor with most of its abilities and then some new. It is worn by Alucard in Castlevania: Symphony of the Night, veteran zombies[2] or a mysterious female[3] warrior (playable) in Portrait of Ruin, and by any of the downloadable characters (Julius, Yoko or Maria) in Harmony of Despair, if those characters have not been purchased yet.

Alucard can find the Axe Lord armor by wearing the Gravity Boots and performing a high jump through the little opening underneath the Master Librarian's chair in the Long Library. Additionally, there's a very slight probability to get the armor as a drop from the spiked ball on top of the Bone Pillar located at the top of the big staircase in the Royal Chapel. Equipping it causes Alucard to yell: "What?!" (しまった！, lit. "Shoot!"), and changes his appearance and abilities to that of an Axe Knight.

The armor provides Alucard an ATT +2 and DEF +15 boost, as well as gaining enhanced movement speed, although with the penalty of not being able to jump very high or regenerate MP at all. He has a short axe that he can hack with but which cannot be thrown. He's also unable to use any of his other abilities or weapons in this mode.

After beating the game once, it is possible to play through the entire game using the Axe Lord armor. Entering the special name "AXEARMOR" in a new file on the Name Entry screen, starts a new game with the Axe Lord armor already in Alucard's inventory. However, it will be necessary to periodically take it off in order to access certain parts of the game.

In Portrait of Ruin, the Old Axe Armor is "a veteran zombie warrior".[2] They are a bit more difficult to deal with, as they will guard against all of Jonathan's skills. Killing 1,000 or more of these enemies (found throughout all stages accessible with the portraits beyond Stella's and Loretta's room in the Master's Keep, as well as on the second-to-last floor of the Nest of Evil) unlocks Old Axe Armor Mode, where the player can take control of this character. This is the only alternate mode in the game that doesn't give the player a partner to switch with.

The abilities of the Old Axe Armor have improved greatly over its Symphony of the Night counterpart, most likely to allow players to play through the entire game without the necessity of taking the armor off to access certain parts.

The Old Axe Armor appears in Harmony of Despair in an unusual manner. When playing in a multiplayer mode, if one of the players selects a downloadable character which hasn't been purchased yet, that player's sprite will be replaced with that of an Old Axe Armor. It will thus appear as if that character is wearing the Old Axe armor, while their real appearance is covered up. Furthermore, that character's voice will not be heard at all and all attacks will sound as if they were simple axe swings. 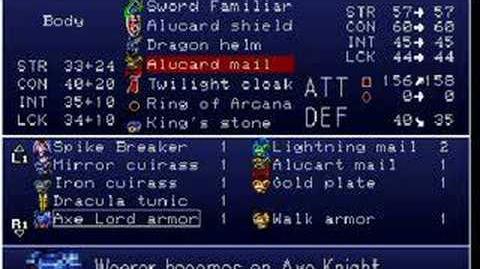 Castlevania Symphony Of The Night - Axe Armor Alucard!
Alucard donning the Axe Lord armor in Symphony of the Night 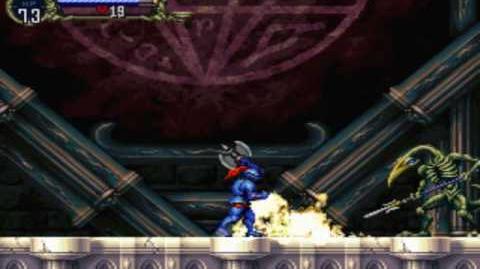 Retrieved from "https://castlevania.fandom.com/wiki/Old_Axe_Armor?oldid=283809"
Community content is available under CC-BY-SA unless otherwise noted.