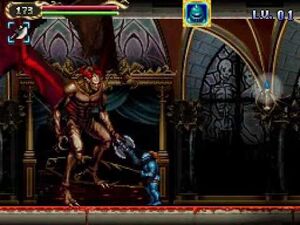 Old Axe Armor Mode is one of the alternate modes in Castlevania: Portrait of Ruin. In this mode, the player controls the Old Axe Armor as a playable character. In order to be unlocked, the player must defeat at least 1,000 Old Axe Armors in Normal Mode (Jonathan and Charlotte) and defeat Dracula and Death in the final battle. Although the player is not required to complete the final battle if a New Game Plus playthrough is made prior to unlocking this mode, just the aforementioned kill quota is necessary on a second playthrough.

This mode is considered to be a humorous addition to Portrait of Ruin, compared to the Richter Mode and Sisters Mode. First of all, the Old Axe Armor is played as a single character, therefore, the Partner System does not apply here. Second, his arsenal is of course, very limited, he cannot use items too. Third, he is very weak overall and requires skill and mastery on the player's side if he wants to finish the game in this mode.

The Old Axe Armor can only use two Sub-weapons; the Axe and the Puppet. the Axe maintains its function of being thrown upward like in most of the other metroidvania-styled games. But interestingly, the Puppet works exactly like its Dawn of Sorrow version, which allows the Armor to throw it forward, then swapping places with it afterwards. 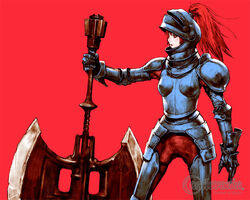 There is a considerable amount of debate and confusion over the Old Axe Armor's gender and identity. The character appears to have a male voice (Jonathan's), however, the game treats the character as if they were female (Zacchino presents a rose instead of a sword and Astarte's charm attack has no effect). Artwork, which may be official or simply fan service, found on the official Konami web page depicts an unknown female warrior wearing the armor.

The description of the enemy indicates that it is a "veteran zombie" which is wearing the suit of armor. This suggests that the playable character may be a zombie, but it could be someone else wearing the armor in the playable mode. When the Axe Armor gets on the high score board of Boss Rush Mode, two portraits are listed, one showing the Axe Armor with its helmet down and an image of Maria Renard is shown as its partner. Also, the portrait shown in the end credits is Maria's. This suggests that Maria is the one who is wearing the armor. The artwork found on Konami's web site does not resemble Maria, however.

One possible explanation for this is that like all other modes in the game, this mode can be considered a two-character mode. One character is the armor itself and accounts for the male voice in the game. The other character is the one wearing the armor, who is female and accounts for enemies' behavior toward her. This may have been the intention for this character, but they did not want to spend any additional time on this bonus mode than they had to, so they took a shortcut and used Jonathan's voice for the male sounding armor and Maria's portrait to represent the female wearing the armor. Then after the game was created, they put up artwork of what the character is supposed to look like on their web site.

Another possibility is that she could be a reference to the character Rita Vrataski from the Japanese military science fiction novel All You Need Is Kill, who is an armored redhead with a giant axe as her signature weapon (the novel precedes Portrait of Ruin by two years, although the manga came out after the game's release).

The true nature of the Axe Armor may never be known for certain without an official statement and may not be important, as the mode is alternate to the series and has no storyline.

Smash
Add a photo to this gallery

Retrieved from "https://castlevania.fandom.com/wiki/Old_Axe_Armor_Mode?oldid=257732"
Community content is available under CC-BY-SA unless otherwise noted.