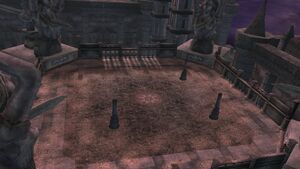 Outer Walls are relatively common environments within the Castlevania series.

They are generally presented to the player once they exit the inner halls of the castle for the first time. High masonry walls are the order of the day in these areas, contrasting with the extensively decorated rooms from indoors, making them perhaps the least pleasing to the eye places found in a game. These areas are usually portrayed as being covered under the veil of the night, and a fastuous sight of a pale full moon frequently helps in enhancing the atmosphere of these otherwise stale places.

Outer walls generally emphasize in platforming and climbing, and it's not strange to find unreachable areas high above which require subsequent visits to be explored. The first time they're visited, however, the player is usually required to traverse along the ramparts of the castle to reach the next tower.

Most of the times they serve as the castle's main hub, connecting to other various stages in the game, and they generally don't have a boss to be confronted.

Retrieved from "https://castlevania.fandom.com/wiki/Outer_Walls?oldid=264043"
Community content is available under CC-BY-SA unless otherwise noted.