Single player
Pachislot Akumajō Dracula (悪魔城ドラキュラ, Pachislot Akumajō Dracula?) is a pachislot game created by Konami Parlor Entertainment. It is a spin-off of the Castlevania series. The first official trailer and website launched in August 2008, and the game was released in pachislot halls on January 5th, 2009. It was later ported to mobile phones on which it could be downloaded through i-mode, Yahoo! or EZwEb. It was also ported to Android and iOS devices on December 24th, 2014.

Its aesthetics are based on Castlevania: Curse of Darkness and features most of its cast, including Trevor Belmont in the leading role. The game functions like a slot machine but also features cinematic scenes. A sequel, Pachislot Akumajō Dracula II, was released in 2010.

Being a pachislot with vaguely connected cinematics occurring randomly during play, the game has no coherent narrative like more traditional games in the series. These cutscenes exists to tease the player, but contain little actual story content. However, going by comments on the official developer's blog, the game does tell a story, although most of it requires the player's imagination to fill in the blanks.[1]

On the blog it's written the game is "another story" (hitotsu no monogatari), a term sometimes used to imply the setting takes place in a parallel world or alternate universe.[1][2] Because the game is mainly based on Castlevania: Curse of Darkness some of the characters resemble their incarnations from the IGA continuity. Together with Pachislot Akumajō Dracula II, it tells the same story of Trevor fighting Count Dracula, who has been revived with the assistance of Angela.[1]

It should also be noted that from the brief interactions between Trevor and Dracula, it's implied they already share a past. This would be further explored in Pachislot Akumajō Dracula III, which is a prequel to the previous two games.

The game structure of Pachislot Akumajō Dracula is different from an average Castlevania game. As such, there is no ultimate end goal, such as for example, defeat Dracula. Instead, the aim is to win medals which can be exchanged at a Pachinko parlor's prize counter.

The game starts out at three possible stages. These are named "Chapel in Castle", "Warehouse in Bergfried" and "Corridor in Castle Walls". During this section of the game, the reels can be constantly spun all the while and several random events can happen, each with different effects. One set of three wheel spins is called a game. The player has the option of manually stopping the wheels but has also the option of using the "semi-auto" and "auto" function. As the name implies, the auto function plays the game automatically. Semi-auto functions the same except the player is able to intervene and take over.

The player starts out with 50 credits, if the player manages to exceed this amount by winning, the amount of medals will go up. If all the credits are depleted and the player has medals, these medals will start to decrease unless the player obtains more credits.

At the left and right side of the screen there are a compass and a treasure box respectively. The compass has a chance of glowing, which brings up the map screen and allows the player to access several events or even ART. The possible outcomes are random and there's also a chance the player will stay at the same location. The treasure box will randomly reward the player with an item. One of the possible items are Hearts, which are either white, blue or purple. These items merely increase the chance of a specific event appearing based on their color. Similar to the compass, the treasure box can let the player access one of the events, as well as ART.

In the game, the player can enter either a Regular Bonus or a Big Bonus. These can be entered after the successful completion of a mission. The difference between them is the maximum amount of medals that can be won. In case of the former, it's 45, and in the latter, it's 300. If the player manages to get a winning pattern, the amount of medals goes up with 12. However, before each set of wheel spins, the amount of medals decreases by 3.

After a bonus, there's a chance the player will go straight to ART, otherwise the Challenge Zone is entered. During a Bonus game the reel may flash, which indicates the chance of entering ART is increased. During Big Bonus there's also a possibility to enter the "Cherry Challenge". If the player manages to get one of three cherries on the first wheel spin, the "cherry navi" is obtained.

"RT" stands for Replay Time, also know as the "Challenge Zone". This stage of the game is mostly the same as before, except the chance of a "replay" (neither winning or losing credits) is higher. The bar at the bottom will turn red to indicate the player is in the Challenge Zone. The goal of the Challenge Zone is to reach ART. The probability of entering ART depends on which stage the player is currently in, with the chance being the lowest in the warehouse and the highest in the corridor.

While in the Challenge Zone, the colors red, blue and black may appear on the screen, which represent cherries. Two cherry colors are "right" and the other is "wrong". This is called the "bat navi". The player has to guess which cherry colors are safe, with the risk of accidentally getting a wrong color. If this happens, the player is returned to the normal mode of gameplay. When the player has a cherry navi, the color which is wrong will be displayed instead, making this challenge somewhat easier.

There are two ways of entering ART. The first requires the successful completion of the "Countdown Mission". During this mission, Trevor must dispatch a certain amount of skeletons, ranging from five to twenty. While doing this, the player has to successfully evade the "wrong" cherries. The other way is through one of the three events, which will allow the player to switch to another stage: the Stage Door, the Map Stage, or the Moon Stage.

"ART" is an abbreviation for "Assist Replay Time", also known as the "Battle Zone". It's a combination of RT Mode and AT Mode. The latter stands for "Assist Time". During this mode, the chance of winning is higher than normal. One set of ART lasts 30 games at most. The first section of ART consists of Trevor running up to Dracula's throne room, which is known as the Spiral Staircase Stage. During this section random events may still happen. Occasionally a cherry navi will appear on the screen. In case the wrong cherry is accidentally obtained, the player is returned straight to the regular mode of gameplay. Also, another type of navi, which displays a winning combination, may also appear. This indicates getting that combination is guaranteed.

If the player manages to stay within either the Battle Zone or Challenge Zone and played ART at least 10 times, the BGM will chance from Divine Bloodlines Ver. 511 to Beginning (Crystal ver.). After another 10 times it changes to Vampire Killer, and after yet another 10 it changes to Bloody Tears, both from Castlevania: The Dracula X Chronicles. If the current BGM is either Vampire Killer or Bloody Tears it may randomly switch to its NES counterpart between battles.

There are several features in the game which are designed to be beneficial to the player. First of all, there is the "Cross System". During normal play, several silhouettes of floating crosses can be seen at the bottom of the screen. If crosses are obtained through the random events, the silhouettes will be replaced by a real cross. If six crosses are collected, the player will instantly enter "ART" mode.

Secondly, there is the "High Probability Mode". During this mode, the background color of the stage where Trevor currently resides in will turn red. The chance of entering ART will then be higher than normal. This mode will be initiated if the player hasn't entered ART after 100 games.

Lastly, if the player hasn't entered ART after 1000 games, the game will go into the "Ceilling" mode. The bar at the bottom will turn purple. Medals can then be earned much more easily and the player is guaranteed to enter ART after a bonus.

The soundtrack for Pachislot Akumajō Dracula reuses a lot of soundtrack from other Castlevania games. These include Castlevania: Curse of Darkness and Castlevania: The Dracula X Chronicles. The original tracks were composed by Takeshi Kuramochi. The composers who contributed to the reused tracks are: Michiru Yamane, Masanori Akita, Yuichi Tsuchiya, Akihiro Honda, and Yasuhiro Ichihashi. The game's main theme is called "Trezier de Spirit", a song with Romanian lyrics, performed by Shunsuke Tsuda (baritone) and Tomoka Hattori (soprano). The game also includes a new remix of "Divine Bloodlines" called "Divine Bloodlines Ver. 511".

Pachislot Akumajō Dracula recycles a lot of assets from previous Castlevania games. These include music, backgrounds, and even character models. The game draws mainly from Curse of Darkness and The Dracula X Chronicles, as well from Lament of Innocence. Most of the cast members from Curse of Darkness make an appearance. Dracula's character model is taken from CGI scenes in The Dracula X Chronicles. Medusa's character model and a modified version of the Succubus are originally from Lament of Innocence. Backgrounds taken from Cordova Town, Eneomaos Machine Tower, and Medusa's lair from the Garden Forgotten by Time are reused for various missions or events. Dracula's Throne Room and the stairs leading up to it from Curse of Darkness make another appearance in the Spiral Staircase Stage and Dracula Battle Stage.

The iOS/Android version of Pachislot Akumajō Dracula is an emulated version of the arcade original. The "Simulation Mode" is a faithful replication of the game and also offers the option of saving progress. An added feature is the "Challenge Mode", which requires the physical purchase of "gashapons" to unlock. There's also an option to buy DLC. They include options to force the game into certain outcomes like a Bonus, increasing the amount of save slots from three to ten, and the option of changing the banner and lamp color of the Pachislot model on the screen. 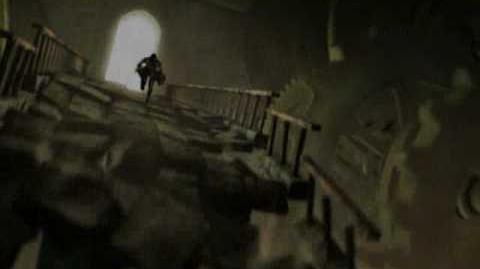 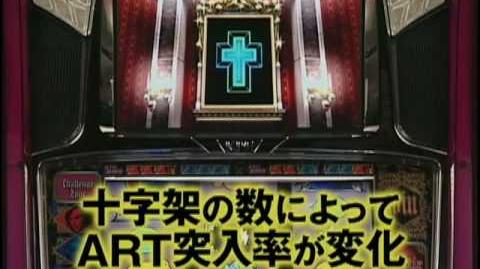 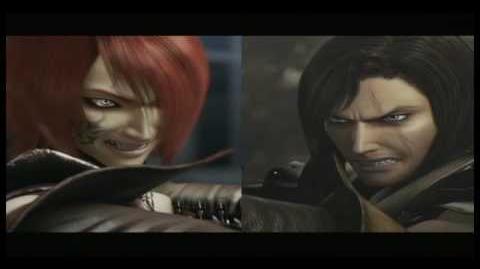 【♪ trezire de spirit 】 Full Music of Pachi-slot Castlevania
Music from the game with a slideshow.