Pagoda of the Misty Moon

Anti-Soul Mysteries Lab
Prison of Eternal Torture
The Pagoda of the Misty Moon (魔天朧月宮 –The palace of moonlight–, Matenrō Gekkyū?, lit. "Hazy Moon Palace Between Heaven and Hell") is a location in Castlevania: Lament of Innocence. It is the main storyline's final area and it is here where the throne room can be found and where Walter awaits for anyone who dares to challenge him.

After obtaining the respective Orb from each one of the main five areas of the castle, Leon finally is able to remove the seal blocking the entrance to Walter Bernhard's lair, a place called the Pagoda of the Misty Moon.

As soon as he sets foot inside, the vampire mockingly greets him and shows himself amused at Leon's futile attempts to harm him. Leon demands him to return Sara, to which Walter surprisingly complies without hesitation. He then "invites" Leon to look for him at the throne room ...if he lives that long. Sara is, thus, finally returned to Leon's arms. Unfortunately, soon he discovers she has been tainted with the curse of the vampire.

After a long cutscene in Rinaldo's cottage and after struggling with Sara's unavoidable fate, the Whip of Alchemy finally becomes the Vampire Killer, a weapon with an inner rage against anything that is unholy.

The Pagoda of the Misty Moon is a huge Gothic castle with two high towers, one on each wing, and a central structure from where a large staircase rises up toward the sky, leading to the throne room.

The first floor is conformed by big halls elegantly decorated with marble floors and statues. These halls are connected by long corridors between each other. In one of these halls, an old opponent makes his return: the Doppelganger. This time the foe is much more dangerous, attacks more ferociously, has new combos and is prone to use his sub-weaponry more often.

The towers can be accessed from the second floor, as well as a richly decorated big hall located at the center of the castle. To reach each tower, two very long corridors must be traversed, which are notable for their high difficulty, as groups of powerful enemies will attack without quarrel in their enclosed interiors, either from a distance or by overwhelming Leon with their numbers. The erratic camera angles chosen here add to the difficulty.

Each tower is divided into various small sections, where Leon must make his way room by room by defeating all enemies in each one, in a manner similar to an endurance mode, while slowly traveling throughout the tower's circumference.

Only the east tower is necessary to be explored in order to gain access to the throne room. However, if the player is looking for a greater challenge, they shall explore the west tower too, where the Unlock Jewel can be found, a gem that unlocks the entrance to the Prison of Eternal Torture in the Castle Entrance.

In the central hall, a stone tablet with the Roman numerals "I", "II", "III" and "V" (with an empty space where "IV" should be) can be found along with a strange mechanical device. To gain access to the throne room, Leon must explore the east tower and get his hands on the "VI" Tablet. Once done, he must then return to the central hall, insert the "VI" Tablet in the device and push the nearby lever, resulting in the tablet being turned backward, now reading "IV". Inserting this tablet into the empty space of the bigger one will produce a magical effect which removes the seal on the door on the east tower (in the room where the "VI" Tablet was initially found), allowing with this access to the Dragon Crest and thus obtaining the means necessary to open the throne room, where Walter awaits. 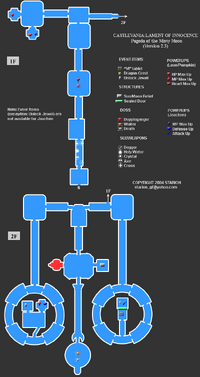 Retrieved from "https://castlevania.fandom.com/wiki/Pagoda_of_the_Misty_Moon?oldid=308394"
Community content is available under CC-BY-SA unless otherwise noted.