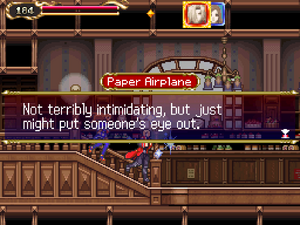 A paper airplane is flown forward and it makes a loop directly in front of Jonathan before flying forward at a downward angle. It can be obtained in the secret bakery in the City of Haze or as a drop from a Flea Man. At a cost of 5 MP, it's the second cheapest of Jonathan's sub-weapons.

When leveled to a max level of 9, both Aitsu and Koitsu, from the Parodius series, will appear standing on top of  the airplanes.

Paper Airplane from Portrait of Ruin

Mastered Paper Airplane from Portrait of Ruin
Add a photo to this gallery
Retrieved from "https://castlevania.fandom.com/wiki/Paper_Airplane?oldid=293749"
Community content is available under CC-BY-SA unless otherwise noted.